Texas A&M Raises More Than $30,000 for Harvey Victims With 'Relief Out' T-shirts

Texas A&M's football program used a T-shirt promotion to aid Harvey relief in Texas. Before this past Saturday's game against Nicholls State, the Aggies unveiled their "Relief Out," T-shirt to raise funds for those affected by the storm.

The shirt features the state of Texas in front of a stylized hurricane with a heart over the state's Gulf Coast area, and says "BTHOHarvey." For those out of the loop, "BTHO" stands for "Beat the h*ll outta."

According to The Eagle, the idea came from Texas A&M student Greta Swift, whose parents were trapped by the floodwaters in Katy, Texas. A group of students came together to create the "Relief Out" campaign, and first sold the T-shirts on Sept. 4. Over just two days, the group raised more than $30,000 by selling the shirts on campus. 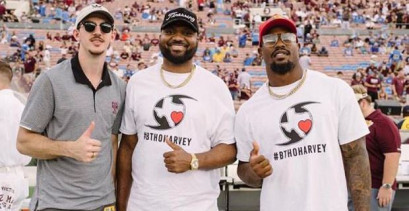 Texas A&M student groups have been selling 'Relief Out' T-shirts on campus and at events to benefit Harvey victims. | Credit: 247 Sports

"After I tweeted the idea, it went viral very quickly on Aggie Twitter," Swift told The Eagle. "I thought, 'Wait, this is something I should really get going,' and so I got the student leaders together. We created a GroupMe, and that GroupMe contains presidents, vice presidents and executives from over 200 student organizations on campus."

From there, the school's athletic department pitched the idea of re-creating a Maroon Out event to benefit Harvey. The various groups involved with the projects reworked the idea to be a "Relief Out," rather than a "Maroon Out."

The shirts are still available on campus at Texas A&M for $10.