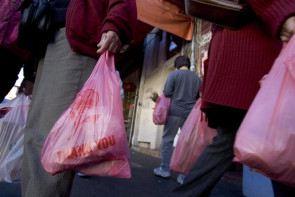 Single-use bags aren't environmentally friendly, and they're becoming increasingly rare in major cities. However, certain bag designs have a place in American culture, and designers are using that for reusable designs. | Credit: Getty Images by David Paul Morris

Plastic bags with a big smiley face or a repeated message of "Thank You" are everywhere. You probably know exactly what they look like without even needing to look at a picture. They're especially common in the houses of people who frequent Chinese restaurants or grocery stores.

They're a little less common now as major cities and states increasingly ban or otherwise cut down on single-use plastic bags, but because of their cultural significance, especially within Chinese-American communities, designers are looking to preserve their aesthetic heritage while staying environmentally conscious.

In photographer Andria Lo’s own “Chinatown Pretty,” a long-running series of photographs showcasing senior residents of Chinatowns in all their sartorial splendor, variations on these bags figure prominently in self-presentation. In New York, a resident carries a reusable red tote paired with a pink plaid over-the-shoulder purse; in San Francisco, a man in a gray suit sports a red tie and a reusable red bag, while a woman in a pink corduroy shirt and pink rhinestone-studded sandals carries an array of groceries in the familiar plastic rose thank-you bag—this one actually printed with the words “Thank You.”

Tsui says the bag designs have evolved into a purposeful, "iconic, kitsch status," and the designs have been adopted into other things, like T-shirts.

And while people might like to reuse the single-use bags (typically stored in a crumpled bunch in a cabinet or under the sink), it's more environmentally friendly to have one reusable bag than many plastic ones. The company Baggu used this mentality to create a bag that provides the same feel as the single-use bags, but with more eco-friendly construction. And, you guessed it, it sells a "Thank You" version of the bag.

It's something people might not think about when they're discussing environmental efforts and changing legislation: Yes, we look at the issue of the plastic bag as a single entity and faceless problem, but we don't really think of the cultural significance of what some people would just think of as trash or, at best, a way to transport their leftovers to the office the next day.

By creating reusable versions of these bags, designers not only fulfill the need for environmentally conscious products that limit waste, but also preserve a particular piece of American culture that, while relatively small, is important to a lot of people.