For every Neil Armstrong, there is a Buzz Aldrin—for every pioneer who ends up in the history books, there is someone situated just inside that shadow, despite doing the same amount of work.

Everyone was so captivated by the story of Four Seasons Total Landscaping—the suburban Philadelphia landscaping company with a recognizable name that hosted Rudy Giuliani’s press conference in its parking lot and later sold more than $1 million in merchandise. But we often forget about its less famous neighbor: Fantasy Island Adult Bookstore, whose business went through the roof after Giuliani’s visit.

We were happy to learn that Fantasy Island also did the smart thing, launching its own line of branded merchandise as it rides the wave of newfound fame. And, honestly, its merchandise store is even more impressive than Four Seasons’.

Don’t worry—it’s all safe for work. (We had to be very careful while researching this story.)

At any other time, in any other reality than the one we currently live in, wearing a protective face mask advertising an adult bookstore in Northeast Philadelphia would be … interesting, to say the least. But, alas, 2020 is far beyond the point of surprising us anymore. 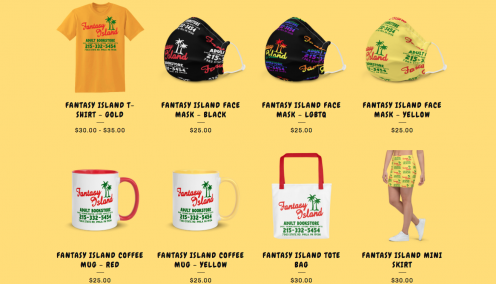 Fantasy Island owner Bernie D’Angelo told Slate that overnight his business started getting thousands of commenters on Facebook posts, and suddenly his inventory was flying off the shelves. The logical next step was apparel, but it took a bit longer than his famous neighbor’s. In a Facebook post, D’Angelo called the moment like “a lightning strike,” so he had to capitalize once he found his footing a little more.

It actually happened pretty quickly. In a Facebook post on Nov. 10, shortly after the Giuliani visit, D’Angelo said that, despite requests, merchandise was “not up our alley at the moment.” Seems like he changed his tune quickly, with the company being extremely active on Facebook and plugging the Big Cartel online store link every chance it can:

When the truth is stranger than fiction, anything is possible.