Amazon Will Officially Become Largest Apparel Seller in 2018, But What About Promotional Apparel?

The rumors of Amazon's apparel market share have not been exaggerated. Back in January, we heard rumblings that Amazon was projected to become the largest apparel retailer by the end of 2018, and it looks like that prediction is still holding strong.

According to TechCrunch, Amazon is taking advantage of the massive growth that the direct-to-consumer online shopping experience is seeing, and the company has no plans to slow down. Thanks to the Amazon's free returns, high-resolution photography and greater selection, the company is the largest retailer by gross merchandise volume.

However, this is not enough for the e-commerce giant. Third-party sellers currently make up 86 percent of Amazon's apparel offerings. Because apparel is one of the most profitable sectors for the company, with 40 percent peak gross margins in the last 10 years, Amazon has a lot of incentive to ramp up its in-house apparel brands.

The one area Amazon is lacking in is its reputation: It's not exactly a trend-setter in the apparel game. TechCrunch suggested Amazon could remedy this problem by purchasing a "buzzy brand" like Everlane.

TechCrunch outlined the steps Amazon has taken to become an apparel powerhouse, and all of these phases certainly position Amazon as a massive threat in the apparel world.

First, the company sold a ton of apparel to learn consumer trends for its market research. Next, it began to sell its private-label clothes to generate higher gross margin. Finally, tech advancements like Prime Wardrobe and Amazon Echo aim to reduce the points at which Amazon Prime customers can choose not to purchase a product. Not only that, but more data can be collected. The more data Amazon has on shoppers, the more of a threat the company becomes to any of its competitors.

But what about promotional apparel? Should the industry be worried about Amazon's apparel presence? The simple answer is: probably.

With Walmart jumping into the promo arena with its PromoShop website, it's not unheard of for an e-commerce giant to make waves in the promo world. In fact, it's probably only a matter of time before Amazon starts pushing direct-to-consumer promotional apparel.

Amazon Custom already exists, where shoppers can customize products with text and personal images. While it's not advertising its apparel offerings, a simple search for T-shirts generates a lot of options. Already shoppers can get their custom apparel through Amazon, and the company has hardly even promoted this. 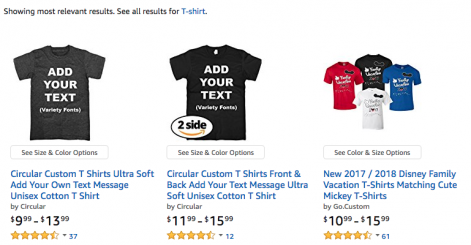 Perhaps Amazon is planning on focusing attention on promotional apparel once it has completed its total takeover of the retail world. But hopefully, it will find a way to work with suppliers and distributors once that day comes.

Until then, we'll keep watching the e-commerce giant.