A little more than two-and-a-half years have passed since then-president Robert Kelley announced that the University of North Dakota would make its athletic programs’ nickname the Fighting Hawks, with the majority vote-getter replacing the Fighting Sioux. The outgoing moniker had been in use for roughly 16 years, with the school having altered that from “The Sioux,” a simpler yet nonetheless controversy-causing choice that it had adopted back in 1930. An email spat between current leader Mark Kennedy and the trustee of a foundation that has endowed the university with millions marks yet another chapter in the acceptance, or lack thereof, of the new nickname and logo.

But the real story is the bizarre set of circumstances that has forced the University of North Dakota to keep selling some merchandise bearing the old Fighting Sioux name and branding.

The latest matter in a saga that essentially started in 1999 pits Kennedy against the Engelstad Family Foundation, whose namesake played hockey for the university. More importantly, one could contend, his family’s name appears on the main sites for athletic competition on the Grand Forks campus, with his eponymous spot hosting hockey action and the Betty Engelstad Sioux Center serving as the source for basketball and volleyball duels.

The school president and trustee Kris Engelstad McGarry, Ralph’s daughter, are at odds over what branding should appear on the arena's center court, with Kennedy hoping for the Fighting Hawks logo to have the honor and the trustee favoring the standard University of North Dakota logo to receive the distinction. That would push the Fighting Hawks identifier to the side of the court, a move that Kennedy feels would not help to promote the new branding or move merchandise. McGarry, meanwhile, holds that the "UND" logo would keep at ease fans and supporters who “do not identify with Fighting Hawks" after the logo’s ill-received unveiling.

Her reasoning is interesting and could lead opponents of it to state that, yes, backers do not identify much with the Fighting Hawks image because they still think of, and perhaps admire, the Fighting Sioux insignia more. The second part of that possibility received a bit of credence through an Associated Press report on the spat between Kennedy and McGarry, noting that hockey game attendees still chant “Let’s go Sioux” from the stands.

That navigation between two branding worlds, one would think, figures to become easier as fans become more accustomed to the Fighting Hawks identification. But those who hold dear to the Fighting Sioux moniker need not necessarily become that accepting of the new term, based on a head-scratching decision by the National Collegiate Athletic Association (NCAA). 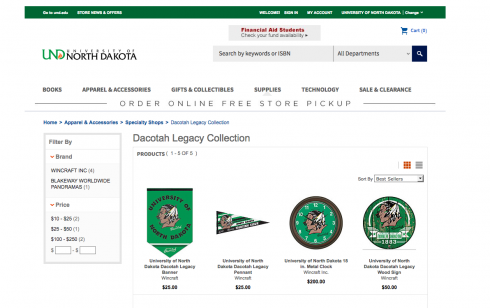 The governing body for more than 1,200 institutions and affiliated conferences played a huge role in the genesis of the present flap, as it threatened to place sanctions on the University of North Dakota in 2005 if officials did not decide to abandon what was deemed a "culturally insensitive" athletic nickname. Seven years later, residents voted to drop the Fighting Sioux as the program’s signifier, but the NCAA stipulated that the school must continue to make use of the Fighting Sioux brand so as not to lose the trademark. Yes, you read that right. The school, scolded for calling on the controversial nickname, must keep it alive, which it does through its Dacotah Legacy Collection.

“UND is in such a horrible position because of this agreement,” radio host and Fargo-Moorhead Forum columnist Mike McFeely said in a 2016 VICE article on the mandatory measure. “There’s really nothing else they can do.”

Two years after he offered his estimation, five Fighting Sioux products remain available as reminders, one might say, of the NCAA’s lackluster handling of everything. This has been an interesting year for analyzing the lifetime of controversial nicknames and logos, as the Cleveland Indians, who will abandon their Chief Wahoo logo beginning next season, will still market goods with the caricature on them in Northeast Ohio and Goodyear, Ariz., the team’s spring training site.

Sports teams, both professional and amateur, are now more than ever finding themselves needing to address their logo and nickname choices with respect to Native Americans. With the Indians and Fighting Hawks/Fighting Sioux as recent high-profile cases, we wonder if those who favor the complete eradication of such appropriations will one day be able to celebrate a complete victory. Given the scope of copyright and trademark rulings and the money that people can make off goods, no matter how insensitive or out of touch they are, though, they might have to continue to settle for partial wins.

Most Valuable Product: How to Play Bigger for Sports and Outdoor Promotions