Despite Name Change, the Cleveland Indians Will Keep Selling Chief Wahoo Merchandise (With a Caveat)

The Cleveland Indians announced yesterday that they would change their name to something unrelated to Native Americans, after years of criticism over the mascot’s insensitive nature.

Even before this, the team spent the last four years phasing out its controversial “Chief Wahoo” logo. But, just a day after announcing the decision to rebrand, the team said that it will still sell Chief Wahoo merchandise into the future, with a caveat: It will donate proceeds from sales to Native American groups.

According to Fox 8 in Cleveland, the franchise will still sell stuff featuring Chief Wahoo, the same logo that it took off all of its uniforms, “as a way to acknowledge [the team’s] history.”

“As part of our ongoing commitment to promote diversity, equity and inclusion, it is our intention to donate profits from the sale of Chief Wahoo merchandise to Native American-focused organizations and causes,” the team said in a statement to Fox 8.

This is drastically different than what other teams that distanced themselves from the Native American imagery of their past have done. Just yesterday, we mentioned how the University of Illinois created a way for fans to trade outdated merchandise for new products.

And before the Washington Football Team even formally announced its name change prior to this season, Nike, Walmart and other major retailers removed all things "Redskins" from their shelves.

Cleveland's decision, then, is a puzzling one. If the team is as concerned with inclusion and diversity as it purports to be, it shouldn’t need to rely on a logo that was so clearly opposed by the people it is ostensibly helping. And it doesn't quite jibe with the official statement from the team:

Hearing firsthand the stories and experiences of Native American people, we gained a deep understanding of how tribal communities feel about the team name and the detrimental effects it has on them. We also spoke to local civic leaders who represent diverse populations in our city and who highlighted the negative impact our team name has had on our broader population and on under-represented groups across our community. I am truly grateful for their engagement and input, which I found enlightening and insightful. When a sports team is aligned with its community, it unlocks the ability to unite people from different backgrounds and bring people together in support of their home team. While Indians will always be a part of our history, it is time to move forward and work to unify our stakeholders and fans through a new name. 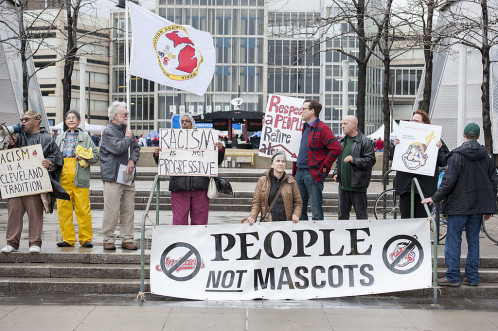 Protestors voice their opinion about Cleveland Indians mascot Chief Wahoo outside Progressive Field prior to the game between the Cleveland Indians and the Minnesota Twins on April 4, 2014 in Cleveland, Ohio. | Credit: Getty Images by Jason Miller

Whatever identity the Cleveland franchise goes with in the future, it will still have fans. It's a major team in a major city with a rich history in the Major Leagues. Fans will still buy new jerseys and T-shirts. Frankly, the name change might lead fans who felt iffy about buying merchandise with “Indians” printed on it to buy even more.

If the team wanted to support Native American groups through the sale of merchandise, it could easily donate proceeds from new merchandise without Chief Wahoo on it. And how much is the team really "moving forward," as it said in its statement, if it's keeping alive an element of its identity so controversial that it already had it removed from its uniforms? There’s a certain cognitive dissonance there.

Also, unlike Washington, which ceased to exist as the Redskins and immediately started doing business as the Football Team, the Indians will keep being the Indians until they land on a permanent name.

That announcement might happen this week, according to the New York Times, but it wouldn’t take effect until the 2022 season. And this news shows that it’s anything but a clean break from the controversial Indians name and imagery.

After the team announced that it would ditch Chief Wahoo on hats and uniforms, fans clinging to the historically used logo voiced their frustration and intent to keep wearing it to the ballpark. The team's decision not to discontinue Chief Wahoo merchandise will make it easier to do that even after the rebrand, whatever the new name ends up being.