The Coolest Small Details on the New Nike NBA Jerseys

The National Basketball Association’s regular season slate commences in 11 days, and while fans (as well as general managers) are making predictions on how the hoopsters will perform, many of them are also wondering how they will look. Nike has commenced its eight-year apparel partnership with the league and has worked hard to produce innovative garments for the athletes. We will certainly witness a clear distinction between the haves (we’re looking at you, Warriors and Cavaliers) and the have-nots (oh, the joys of being a member of the Brooklyn Nets). But establishing parity with respect to attire is going to be a big aim on the part of the industry behemoth. Nike has issued flashy uniforms for each franchise, and certain add-ons, not to mention separate sponsor patches for many, figure to make the action even more eye-catching. 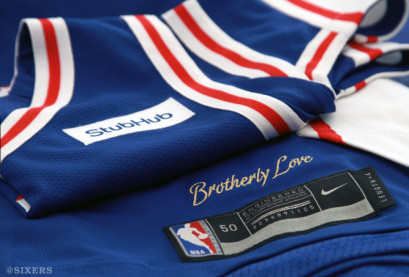 The Philadelphia 76ers are receiving "Brotherly Love" from Nike through its uniform alterations. (Image via sixers.com)

We here in Philadelphia have, well, suffered for four seasons, including the horrendous 2015-16 campaign that saw the 76ers notch 10 wins (that’s akin to a three-week stretch in the Warriors’ world). So Nike’s decision to add Brotherly Love script serves as a nice way not only to acknowledge the city’s Greek-rooted name but also, we would hope, to serve as a possible “Thank you” to the team’s supporters for not letting thin times thin their patience. Sports Nation rounded up seven other supplemental components to the sporting apparel, and I must say that the overall theme I gather from inspecting them is unity. In other words, we have long heard that there is no “I” in “team,” and many of these additions, which will definitely cause jerseys to be even more popular come the holiday season, make apparent that each club has a you’d-better-watch-out-for-us vibe, especially the 76ers’ one.

I am not simply going to be a homer, however, in inspecting these, though it is going to be nice, particularly since it appears the Brett Brown-led bunch has left behind “The Process” days, to see the back collar-situated patch that will bear “3,” the number of league championships the organization has won. (Hey, we can’t compete with the Celtics’ 17 crowns or the Lakers’ 16 titles, but at least we’re not the title-less Nets.) Such an add-on can prove great inspiration for any team that has won a championship to go after another this season, no matter how many general managers think the Warriors will win their third title in four years.

While you can’t win them all (the Indiana Pacers, for example, are going to have their players’ full names on the back of their jerseys—good luck fitting “Domantas Sabonis” and “Bojan Bogdanovic,” guys), most of Sports Nation’s selections made me nod or smile. The Cavs’ “All for One, One for All” slogan is going to make an appearance as league torchbearer LeBron James, reunited with Dwyane Wade, hopes to bring a second title to Cleveland. All you “Rip City” fans in Portland will not find yourself short on attention, as Nike is honoring the 46-year-old nickname that then-play-by-play announcer Bill Schonely coined, and Milwaukee Bucks’ buffs will head to the Bradley Center hoping that foes will “Fear the Deer.”

With revenue sharing being a controversial topic around the league, one wonders if these Nike add-ons could somehow close the cap, at least economically, between the association’s titans and would-be contenders. What is your stance?