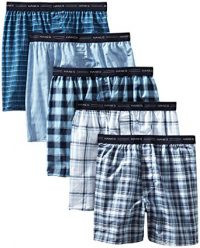 We've been keeping tabs on Amazon's apparel takeover for quite some time, and one thing is certain: The company is making big moves. From its new Prime Wardrobe service to its on-demand apparel manufacturing patent, there's no limit to Amazon's potential in the clothing department.

But, what we didn't see coming is Amazon's underwear business being the main catalyst for the company's rapid apparel growth. According to Business Insider, a new report from retail consulting firm One Click Retail revealed that underwear sales accounted for two out of five of Amazon's top-selling apparel categories last year, making up $415 million in sales.

There's no particular reason Amazon has found so much success in this category, but perhaps it can be assumed that many consumers much prefer shopping for these more intimate purchases in the comfort of their homes, rather than a public department store.