The Killers Are Selling Branded Hot Sauce Named After Their Songs

When we saw that The Killers had a new collection of branded hot sauces, we thought to ourselves, “There better be one called ‘Hot Fuss.’”

Thankfully, there was, and we didn’t need to write any angry letters. (For those who don’t listen to The Killers, “Hot Fuss” is the name of their breakout 2004 album.)

On the band’s site, where the hot sauce is available for pre-sale, the band says it is “Hotter than Vegas [the band’s hometown], and with four tasty flavors, it’s more than we thought we’d pull off, to be honest.”

Each sauce is also reportedly hand made in small batches, and the labeling is a clever cassette tape motif, with “handwritten” labels for each product’s name.

Bands are getting much more creative with their merchandise offerings. Part of that might have been the draw of creating merch and album bundles, but it’s also just evolving times where people want more than just a T-shirt or a sticker.

Another part of it is necessity. Right now, when tours aren’t happening and streaming sites are paying out meager sums, bands need to find other ways to generate revenue. T-shirts and hats are safe bets, but it pays to think outside the box.

This past weekend, Macca teamed up with Postmates to give customers (especially those who ordered vegetarian) a chance to win some "McCartney III" merchandise like T-shirts, a mask and the record itself. 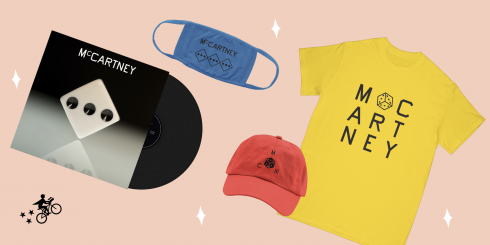 Sometimes you have to spice things up. McCartney took that to mean partnering with a modern service platform to appeal to a wider audience and broaden his reach beyond the usual channels.

The Killers took that literally.