The Magnet Group, Washington, Missouri, last week revealed the winner of its 2021 Fran Ford Award. The supplier introduced the award in 2018 following the passing of Fran Ford.

On behalf of Bill Korowitz, CEO of the Magnet Group, and the Fran Ford Award committee, the company announced that Linda Vollmer, order entry supervisor, is the 2021 Fran Ford Award Winner.

“Linda embodies the outstanding characteristics that defined Fran: being a great friend, mentor, volunteer, passion for the company, kindness and generosity,” said Aaron Gunderson, senior vice president of sales for The Magnet Group and Fran Ford Award committee chair. “Her commitment and dedication to her family, friends and TMG is second to none.” 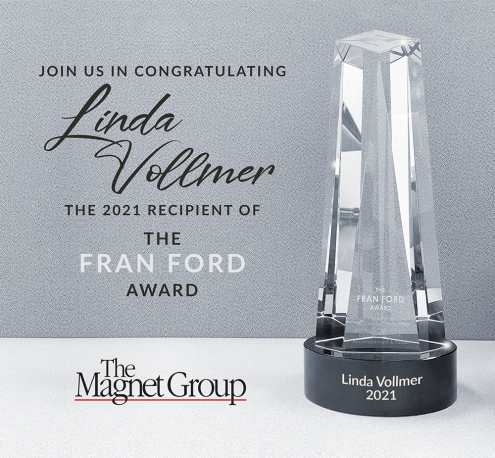 The Fran Ford award is The Magnet Group’s highest honor, given annually since its inauguration to a TMG employee. All TMG employees are eligible and are nominated by their colleagues.

“The Fran Ford Award recognizes a TMG employee who embodies the outstanding characteristics that defined Fran Ford,” The Magnet Group said in a press release. “Fran’s many amazing personality traits that made him become one of the most endeared leaders in the promotional products industry were that of being a great friend, a mentor [and] a willing volunteer. He had such passion for the industry. He was kind, generous, funny [and] charming.”