The $50M-a-Year Masters Merch Shop Is Going Online, But Only for Ticket Holders

Golf fans know that Masters Tournament merchandise is a hot commodity. It’s not quite as coveted as the green jacket, but since you can’t buy Masters-branded items anywhere outside of Augusta National, it acts as sort of a badge of pride that you were there. Or, at least you know someone who was, since people buy up plenty of gear to bring home for friends.

This year, the Masters looks a little different. Rather than the scheduled April tournament, the event will happen in November and with no fans present. So, with no one coming to Augusta to watch, what’s the plan for the merchandise? Will it still be exclusive somehow even when it’s sold online?

Fans who bought tickets for this year’s event will be able to attend next year’s tournament, and their tickets will give them access to what an Augusta spokesperson called “an online shopping experience.”

To keep the exclusivity alive, all information regarding this online store will be sent directly to ticket holders. And they’ll probably keep up the upscale vibe shoppers at Augusta are used to. We can’t imagine an event with such brand recognition and a highly protected aesthetic just phones it in when it comes to e-commerce, especially since the merchandise is such a big cash cow. 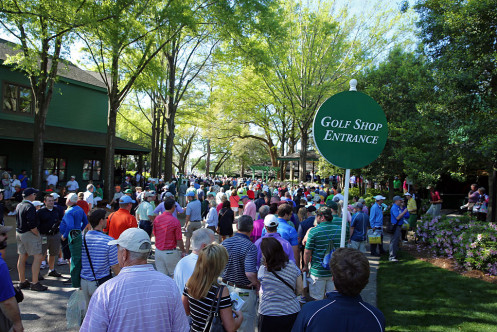 There won't be any lines outside of the shop at Augusta National this year, after the Masters Tournament organizers announced it would be held without spectators in November. | Credit: Getty Images by Andrew Redington

Golf.com reported that Augusta National makes just shy of $50 million in merchandise revenue each year. That number might be a little lower since there’s no possibility for impulse buys in the clubhouse, but with the exclusivity still intact and with the added bonus of being able to commemorate the tournament that happened behind “closed doors,” there's still potential for big sales.

Also, since the products are being delivered directly to shoppers’ homes, it might even make them more inclined to buy more, since they don’t have to stuff them into checked bags or carry them onto the plane back home.

The Masters:
“As a 2020 ticket holder, you will have exclusive access to purchase Masters merchandise online.“

Sporting events have had to find ways to connect with fans in new ways, and they’ve had to do it fast. This probably won’t stay the norm in the future, as so much of the Masters’ prestige comes from the fact that you have to be there to get the goods, but other events and tournaments might beef up their e-commerce offerings even once fans are allowed back in the stands.