The NBA released its new series of redesigned and renamed end-of-season trophies, featuring an eye-catching design theme and celebrating former greats of the league. Each one is much more than just pretty to look at. They feature fun details that any NBA fan – or trophy designer – will appreciate.

"Our new collection of trophies celebrates some of the greatest and most impactful players in the history of the NBA," NBA commissioner Adam Silver said in a press release. "As we recognize the league's top performers each season, we also pay tribute to the legends who embody these prestigious awards."

The standout award is the newly-named Michael Jordan Trophy, given to the league's MVP. 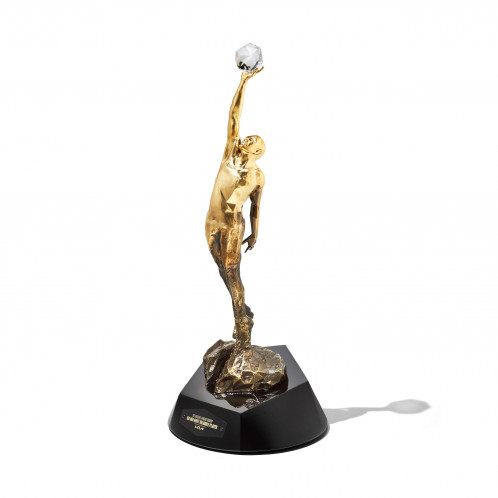 The design stands out from the rest of the individual awards (more on that in a second), and features "a player breaking out of a rock to reach for the ultimate rock — a crystal basketball." As the eye works from the base to the crystal ball at the top, you'll notice that the trophy is more shiny and polished. This was a purposeful design element the NBA called "raw to refined," representing "the MVP's hard work and progression from entering the league to achieving the NBA's greatest individual honor."

Another fun detail is that it stands 23.6" tall and weighs 23.6 lbs., representing Jordan's famous number 23 and his six NBA championships. The namesake badge is also six-sided, and the base is constructed at a 15-degree angle to represent Jordan's 15 years in the league. The crystal basketball at the top also has 23 points, and measures 1.23 inches in diameter, "in reference to the singularity of the MVP and Jordan's standout career."

Paying homage through the details.

An in-depth look at the intricacies and stories featured within the design of the new Michael Jordan Trophy for the #KiaMVP. pic.twitter.com/WyOXgsKVxQ

It was designed in partnership with Jordan brand designer Mark Smith, and will be manufactured by artist Victor Solomon.

Featuring an NBA player ready for a matchup in a classic defensive stance, the Hakeem Olajuwon Trophy is named for the all-time leader in blocks and will be awarded to the #KiaDPOY. pic.twitter.com/VcdmLiiAK1

All of these are works of art, really. The Jordan award of course stands out due to its meticulous detail and references to one of the greatest athletic careers of all time through little design Easter eggs.

They're also promotional products at the end of the day. These awards are all sponsored by Kia, meaning "Kia" is written on the trophy right next to "NBA."

These are extravagant trophies, but they still provide good inspiration for promotional products suppliers and distributors. They do more than just sparkle, they represent the values of the player they are given to, as well as the legacy of the players for which they are named. They use small details to tell a whole story without needing any words other than the logo placement.

Even the Michael Jordan Trophy, bearing the name of one of the most celebrated names in sports history, also includes the Kia logo.