The Rams Won the Super Bowl, But Who Won the Merch Bowl?

At the final whistle last night, the Los Angeles Rams were named the Super Bowl Champions in front of a hometown crowd. Naturally, Rams fans in LA (and maybe a few in St. Louis still) wanted to commemorate the win through merchandise, but don't assume that the winning team is the one with the strongest merch sales leading up to the game.

Cincinnati Bengals fans were clearly excited about their team's trip to the Super Bowl, as an insights report from SimilarWeb, digital intelligence platform, showed that visits to the Bengals' website grew by 402.4% this season, compared to just 80.7% for the Rams.

Cooper Kupp was named Super Bowl MVP after a strong showing, but he's just behind Bengals QB Joe Burrow in merchandise traffic. Kupp was followed by Ja'Marr Chase, Aaron Donald and Evan McPherson (showing that kickers can also be stars): 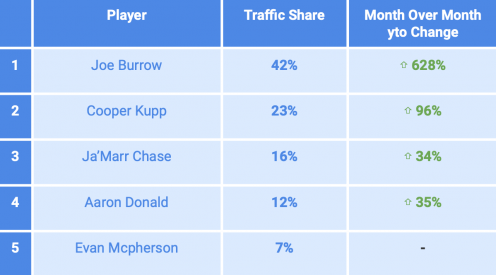 Burrow accounted for 42% of player merchandise search traffic between the two competing teams, and grew 628% in popularity from December to January, during the end of the season and playoff run.

The Bengals merchandise boom was likely due to the fact that the franchise had never before reached the Super Bowl, so Cincy fans were quick to celebrate the occasion, win or lose. SimilarWeb also chalked it up to Burrow taking the team to the Super Bowl in just his second NFL season. The report also shows a 140.6% increase in Bengals site visits after the team overcame a 14 point deficit to beat the Jacksonville Jaguars in September.

But let's talk about where fans are getting their gear. Based on web traffic, the top e-commerce site for Super Bowl merchandise was Fanatics, which took up 33% of the market share, followed closely by NFLShop.com with 31.77%. After that, it was a significant drop to Rally House, with 11.37%. For what it's worth, Amazon only took up 4.95%, less than Nike's 9.65%.

"As noted above, sentiment about a team’s quarterback is a huge driver of digital growth and merchandise sales," SimilarWeb noted in the report. "Joe Burrow’s success as a young quarterback and the team’s return to the Super Bowl has been widely credited with the rejuvenation of the Bengal’s franchise and fan loyalty. We see this as we look at direct merchandise traffic and engagement as well as their NFL sales segment traffic. Both franchises saw a spike at the end of January 2022, once their places in the Super Bowl were cemented."

So, yes, the Rams were the ones lifting the Lombardi trophy at the end of the night, and they'll be the ones on parade buses through their city. But the Bengals showed that everyone loves an underdog, and that even without that first franchise championship, the team has a lot of people interested.