Nobody could even think to deny that 2017 has proven an amazingly profitable year for Disney, whose overseers will certainly enjoy their Monday morning coffee when discussing this weekend’s “Star Wars: Episode VIII­ – The Last Jedi” returns. The stretch has also made rose gold even more of a loved and lucrative hue, with Disney doing its part to propel the shade to added prominence. The company is again capitalizing on admiration for the color and its own assortment of merchandise offerings by announcing the impending release of rose gold T-shirts. 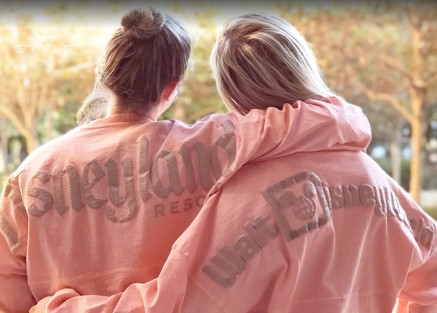 The Disney rose gold spirit jerseys will definitely warm the hearts of end-users once they are available. (Image via popsugar.com)

The business behemoth revealed the news Saturday through its style Instagram account and yesterday via Twitter, tinting the holiday season with an extra layer of positivity for its devotees. The long-sleeved spirit jersey goodies will definitely appeal to all purchasers, especially those whose body heat Mother Nature never forgets to put to the test every winter. The social media post tantalized fans by mentioning where the garments will be available, with Disneyland and Walt Disney World being the physical locations and Shop Disney Parks being the online source, but, in keeping with Disney’s beloved knack for building suspense through movies, it did not disclose when end-users can warm their hearts by buying them.

‘Tis the season to be jolly but not necessarily patient, so with Christmas rapidly approaching, one has to figure that not only are consumers ready to color themselves tickled pink thanks to the rose gold shirts but also that the powers that be are also excited to build on their base’s adoration for all things Disney. The California-situated company has become so adept at using its marketing acumen recently that I believe that it could score success with products it unveils because, as Rapunzel noted in “Tangled,” the rewards of venturing outside one’s comfort zone are worth it.

With that in mind, what would you like for Disney to present to the masses next? Which film(s) do you feel could product the next (rose) goldmine?