We clearly have made our fanaticism for the Spice Girls known, so you can imagine our elation when the girl group announced a reunion tour. Admittedly, we were pretty disappointed to see the reunion tour wouldn't extend past the U.K., but at least there's a new Spice Girls charity tee that anyone can buy.

According to Harper's Bazaar, the newly reunited Spice Girls (aka the same group minus Victoria Beckham) has unveiled a charity apparel collection featuring a T-shirt, sweatshirt and hoodie that feature the phrase "#IWannabeASpiceGirl." All the proceeds from the collection will go towards Power Up, a part of Comic Relief's Gender Justice pillar, which centers around equality for women and girls. Can you say Girl Power? 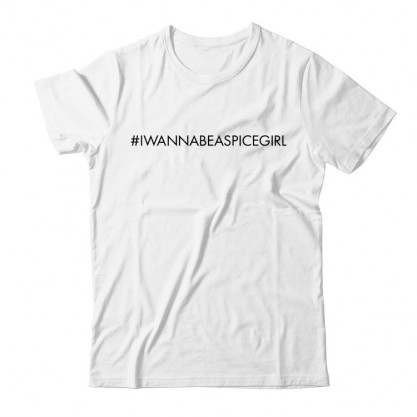 “Equality and the movement of people power has always been at the heart of the band. It is about equality for all, 'every boy and every girl,'" the band said in a statement, according to Harper's Bazaar. "We recently found out that charities focused on issues faced by women don’t get the funding that they desperately need, so launching a campaign to raise funds for these issues is incredibly important to us and an area we want to support.”

The collection is available at Represent.com for three weeks only, and we are sure these pieces will go quickly—ticket sales for the band's reunion tour broke all kinds of U.K. Ticketmaster records.

The Spice Girls are no stranger to charity tees. Over the summer, Victoria Beckham released a T-shirt for Red Nose Day, which one of our editors purchased and loves. (Yes, it's me). We think it's great that the Spice Girls are getting involved in charitable causes, especially ones that promote women's equality.

Now if they would just extend their reunion tour to the U.S., we would truly be overjoyed.