It's been a while since we've had a good story for our "Promo History Lesson" series, which is totally still a thing we did not forget about. Today's story, dear readers, comes from the Cold War-era Space Race, where the U.S. and USSR competed to be the first nation to send human beings to space and, then, to the moon.

While historians recognize Soviet cosmonaut Yuri Gagarin as the first human to reach the stars, he had a few (non-human) predecessors, and they were just as celebrated as Gagarin. Most notable were the dogs who first showed that it was possible for living beings to survive the trip home.

Atlas Obscura did a fun look at the promotional products that were all over Soviet Russia following the successful trips of very good cosmonaut dogs Laika, Belka and Strelka.

Laika was the first pup to successfully go into orbit on Sputnik 2, and therefore got her time in the spotlight first. While Laika didn't make it home, she proved that creatures could survive leaving the atmosphere and being in space.

Her narrow face, flanked by golden stars, rockets, planets and slivers of the moon, popped up on stamps, postcards, porcelain plates, clocks, watches, cigarettes, matches and much more—anywhere there was room to plaster it. She was often depicted as Lenin was, Hollingham writes—chin slightly lifted, noble gaze fixed out on the horizon. Though the public didn’t know it at the time, Laika’s mission was always going to be one-way; the Soviets didn’t yet possess the technology to pull a spacecraft out of orbit and land it back on Earth. But on these pieces of patriotic propaganda, Hollingham notes, “the dog was presented as though she had known she was dying for an important cause: helping her masters conquer outer space.” Much later, at a press conference in 1998, Soviet scientist Oleg Gazenko expressed doubts about having dispatched Laika on a death mission. “The more time passes, the more I’m sorry about it,” he said.

Belka and Strelka, however, orbited the earth 18 times and made it back home to their favorite toys and parks. 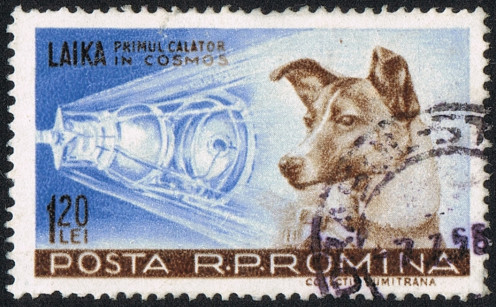 "Laika souvenirs had been popular, but Belka and Strelka took the commemorative space dog business to a whole new level," Hollingham said.

In addition to items like plates and collectible coins, the duo appeared on Russian Nesting Dolls, were adorable as hell. (Click this link to view them.)

Some of the items even made their way to museums. Hand-painted decanters and porcelain models of Belka and Strelka are currently for sale at the Museum of Jurassic Technology in Los Angeles; and even Belka's taxidermic remains are on display at the Memorial Museum of Cosmonautics in Moscow.

Everyone likes to think their dogs are the best, and they are correct, because all dogs are the best. But there's obviously something special about these trailblazing pups who unknowingly shaped the course of human history.

Promo History Lesson: How Elvis' Manager Got His Haters to Buy Merch

What Is 'Digital Merchandise' and Why Is This Rising YouTube Star Selling So Much of It?