The SWAG Act Is Still Alive, But It's Now Much More Industry-Friendly Than You Think 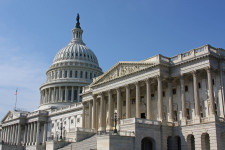 Iowa Sen. Jodi Ernst’s SWAG Act gained momentum in the Senate thanks to support from big-name legislators like Rand Paul and Rick Scott. What we’ve learned since our story last week is that the bill’s new, revised version was done with input from PPAI, and is at a point where the association is happy with it if it becomes signed into law.

Anne Stone, director of advocacy and member engagement at PPAI, told Promo Marketing that the current version of the SWAG Act is something “we actually like.” Getting to that point required immediate action from PPAI, who sent representatives to D.C. within days of the news first breaking.

“[The bill] had this moratorium on federal agencies spending money on promotional products to promote themselves,” Stone said. “So, it wasn’t a complete ban. It was a little more nuanced than that, but agencies can’t be spending money to promote themselves. A lot of scrutiny was on mascots and things of that nature. Even coloring books. It was a focus on not promoting yourself with the use of promotional products.”

The bill had exceptions, such as the census, military recruitment and challenge coins. PPAI president and CEO Paul Bellantone contended that it would be more effective for these government agencies to come in with a detailed plan, outlining how promotional products would be part of a marketing plan that would yield a return on investment.

“They were really open to that, and incorporated the language that we were suggesting into the bill itself,” Stone said. “And we’ve been in communication ever since on it. So, the bill they’re putting forth now, we do not oppose as an association. We’re good with it.”

There are now two realistic scenarios:

One, the bill goes through the House and is ratified into law as it is. In that case, PPAI and its association members have cooperated with legislators to allow government entities to still use promotional products in a constructive and well-planned way while limiting actual wasteful spending elsewhere.

Or, two, the bill is shot down in the House, and the promotional products industry continues as if the bill never existed at all.

The second scenario is a little more realistic, given the polarization of Congress.

“There are times when federal agencies or the federal government or any customer perhaps doesn’t have a thoughtful promotional product, and their whole campaign is less effective than it could’ve been if they had been a little bit more thoughtful and worked with some of the incredibly professional people in our industry who could really elevate the whole program,” Stone said. “There’s just so much doom and gloom. If we could just let people know that maybe this isn’t something to add to your panic list.”