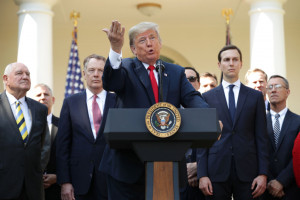 This past weekend, the contentious and sometimes unpredictable NAFTA talks culminated in a new deal between the three neighboring countries: the aptly named United States-Mexico-Canada Agreement, or USMCA for short. Those looking for a gigantic overhaul of NAFTA will be disappointed, but there are a few key points in the new agreement that show that there was still some haggling that needed to be done by all parties involved.

The Trump administration has shown that it is not afraid of tariffs, even when they strain relationships between long-time allies. In the USMCA, there's a provision that automobiles must have 75 percent of their parts manufactured in one of the three nations to qualify for zero tariffs. This number is up from 62 percent in NAFTA, according to Vox.

There's also a point that benefits manufacturers, as 40 to 45 percent of automobile parts must be made by laborers who earn at least $16 an hour by 2023. Mexico has reportedly agreed to pass laws giving workers the right to unionize, protecting migrant workers, and protecting female workers from discrimination. Each country can also sanction another for labor violations.

In an announcement made just before the NAFTA deadline buzzer sounded, President Trump said that the U.S. and Mexico would go it alone after Canada wasn't able to come to an agreement on the new deal. While some reported that this was the end of the three-nation pact, we reported that Canadian Prime Minister Justin Trudeau was optimistic that they could still cooperate with the others and make a deal.

His feeling ended up being correct, and it came with allowing U.S. farmers more access to the Canadian dairy market, of which Canada had historically been protective. 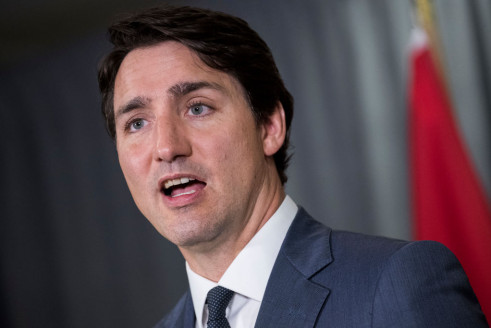 Despite President Trump signaling that Canada was out of any NAFTA renegotiations, Canadian Prime Minister Justin Trudeau expressed optimism before the renegotiation deadline. | Credit: Getty Images by Drew Angerer

"It's not NAFTA redone," President Trump said, according to the New York Times. "It's a brand new deal."

One of the other big changes is the issue of a sunset clause, which was something the three nations also butted heads over. NAFTA was indefinite, but the U.S. wanted to implement a clause that would cause the terms to expire after a certain period of time. The three countries settled on a 16-year timeframe, with the deal subject to review every six years.

As stated before, international trade has been a pillar of Trump's campaign and subsequent presidency so far, and not just only with our immediate neighbors. His relationship with China has been tense, to say the least, and the furthering of tariffs and trade-war threatening has created even more of a divide between the two economic superpowers.

While USMCA only directly relates to the U.S., Canada and Mexico, there's a point in the agreement that in no uncertain terms relates to North American countries trading with China, and the desire of the U.S. to lessen its reliance on Chinese manufacturing. A line toward the end of the agreement, Clause 32 Section 10, allows member countries to pull out of the agreement if another pursues a separate free-trade agreement with a "nonmarket country." The Washington Post reported that Canadian politicians are calling it the "Trump veto."

Basically, sign a deal with China (or a similar agreement like the erstwhile Trans-Pacific Partnership) and you get the boot.

"It sent a very strong signal to the rest of the world that you're either with us versus China, or you're against us," Jorge Guajardo, former Mexican ambassador to Beijing, told the Washington Post. "Beijing should be very concerned."

It creates a Cold War-esque trade climate, to an extent. There's the First World, the U.S.-aligned countries; and the Second World—the ones, in this case, aligned in trade with China.

While those lines aren't specifically drawn out, and while some are still skeptical to use the term "trade war" to describe the U.S.'s current relationship with China (though the president hasn't shied away from such terms), this is about as close as one can get.

The USMCA is a mission statement from the Trump administration most of all: It doesn't want to be tied down to something forever without the opportunity to negotiate by threatening to leave or run out the clock, and it won't tolerate anyone playing ball with the other team.

It might seem combative, or at least restrictive, but it's probably going to happen. Trudeau and Mexican President Enrique Peña Nieto have said they plan to sign it before Peña Nieto leaves office in November. All three countries' legislative bodies need to sign it, too. Depending on where the U.S. Congress is in terms of party lines, the U.S. might even be the one to drag its feet.