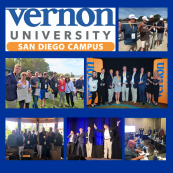 "Vernon's National Sales Meeting can be described using one word: fantastic!" said Dave Regan, vice president of sales and marketing for The Vernon Company. "Our account executives were buzzing about the renewed enthusiasm among their customers, which was just the news that our key suppliers wanted to hear as they mixed and mingled with Vernon's best producers, trying to find that special way to capture our client's attention and business."

Opening day of the meeting began with a fun, challenging group competition on the resort's sandy beach.

"With teams led by Vernon's Platinum supplier partners, the company's account executives battled each other for bragging rights and prizes," said Andrea Smith from Vernon, who plans many of the meeting activities. "From the back-to-back race to the Cheeto head and brain teaser competitions, salespeople showed their competitive nature and went all out."

A more formal awards banquet was held the first evening in San Diego, in which a number of the company's top producers, rising stars and supplier partners were recognized. The second and third mornings of the meeting included up-close-and-personal sessions, in which the company's Platinum and Gold suppliers shared case studies and more in small group settings. On the afternoon of the second day, salespeople took advantage of a 70-booth tabletop show from supplier partners.

The meeting concluded with a luncheon recognizing Vernon's Million Dollar Club members, followed by an inspirational and motivational presentation from retired Army sergeant-turned yoga instructor Dan Nevins, who told his moving and personal story about survival and living your best life. Though his speech ended with a standing ovation and closed out the meeting, the support for his effort continues. To date, Vernon account executives and home office staff have raised more than $5,000 for Dan's Warrior Spirit Retreat endeavor.

"From the first day of the meeting to the final words of wisdom and experienced shared by Dan Nevins, this year's sales meeting was a tremendous success," said Regan. "San Diego will be hard to beat, but we're already planning for next year's sales meeting in Charleston, S.C., in April 2020."

For more information on The Vernon Company, visit www.vernoncompany.com.