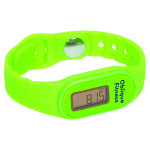 We may not realize it, but a lot of us go through our daily lives with smartphones almost fused to our hands. With the ability to make calls and texts, store media and play games and apps, these versatile pieces of technology have nearly integrated themselves into the human body. The next wave of technology promises to take that concept a step further, putting tech not just in our pockets, but on our person.

As the promotional apparel industry shows, an imprint that is worn throughout the day is a powerful marketing tool. With wearable technology, it’s not only worn, but used over and over again every day. To help you harness the potential in these new products, we spoke to three industry experts: Christopher Duffy, director of marketing at Ariel Premium Supply, St. Louis; James Guan, chief tech enthusiast at Acehigh Tech Corp., Chino, Calif.; and Justin Weidling, marketing manager at Qpromo, Wheeling, Ill.

Smart Watches
When thinking about wearable tech, the first products that come to mind are smart watches and fitness trackers. Perfect for giveaways at marathons or 5K races, these watches promote healthy living while still offering vital daily-use features.

When deciding which fitness tracker to sell, distributors should examine all the features and how they compare to the rest of the market. Duffy shared the questions that suppliers often ask themselves about wearable features.

“How many features can you put in?” he said. “Can you put in an app? Can you build in things like the heart rate monitor? Is there a stopwatch as well? Can you save your last seven days? Is there a memory saving component to it?”

Guan, whose company started carrying wearable products three years ago, offered an explanation as to why it’s so important for distributors to test these devices thoroughly.

“A [smart]watch may be user-friendly, but the app designed to go with it can be a nightmare to use. Often times, these apps are developed by third parties [that] loosely use translation that’s hard to understand. Be sure to test out each product over a period of time, as some usage questions or issues may not surface right away.”

Headphones
Another category of wearable technology that is always in fashion is earphones and headphones, which have seen a lot of new developments in recent years. Apple’s decision to ditch the audio jack on its newest model of iPhone has pushed many companies to roll out new, wireless earphones.

Ever since the days of the Walkman, a stylish set of headphones has been a fashion
statement. And according to Weidling, the place where most colorful earphones and headphones flourish is with the younger market.

“The university market is where we sell the most ear buds,” Weidling said. “At game-day giveaways and incoming freshman giveaways especially.” Weidling also said that restaurants, bars and breweries like to use earphones as prizes on game nights and other events.

From Retail to Promo
The consumer world has swelled with flashy new wearable tech products in recent years. As big tech companies continue to innovate their wearable lines on the retail side, the price point of promotional tech variants is sure to go down.

“I look forward to trickled-down technology being more affordable, such as L.E.D. heart-rate sensors, like ones on our PulseTracker watch,” Guan said. “I do see another category of wearable tech in the Bluetooth earbud category flourishing, especially with the release of the iPhone 7 without earphone jacks.”

To find out how retail advancements may affect the promotional market in the future, Guan suggested attending trade shows like the Consumer Electronics Show and E3, or for a less expensive option, hanging around a local Best Buy.

What's In Store for the Future
From Duffy’s perspective, the future is bright for wearable tech, but the basic usability of the product shouldn’t get lost in an array of flashy features.

“The corporate buyers … will still be looking for something that’s easy to use,” Duffy said. “The [Apple Watch] has a lot of instructions, a lot of screens. It still has to be easy to use because … most often, our products will be distributed quickly.”

When it comes to earphones and headphones, Weidling noted that customization of features will be a key factor going forward.

“The younger generation, they don’t mind waiting for longer lead times as long as they get something extremely cool,” Weidling said. “We like having an a la carte approach where you can just customize each different tech solution since most tech is being done overseas anyway.”