Here’s what’s happening this week in the apparel world…

Don’t mess with the U.S.—or U.S.-made goods. The former owners of Barrier Wear learned that the hard way when they pleaded guilty to one felony account of obstructing a federal auditor after an investigation unveiled an operation that resulted in defrauding the Pentagon of $30 million, Fox News reported. Barrier Wear was a subcontractor for a company that holds a contract with the Department of Defense (DOD) to make cold-weather trousers and jackets, but an investigation shows that the company manufactured the clothing abroad (which goes against the Berry Amendment that requires the DOD to buy domestically produced goods). The duo face up to five years in prison and will be sentenced in March. 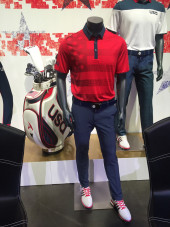 The countdown to the 2016 Summer Olympics is on. And the unveiling of the outfits the men’s and women’s U.S. Golf Teams will be wearing in Rio—when golf returns to the games for the first time since 1904—has us even more excited. According to Golf Digest, the Adidas uniforms include the quintessential American colors and plenty of performance features (think stretch fabric and moisture-wicking material). Team USA, fore the win! 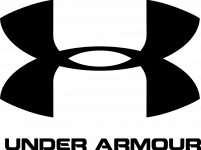 Under Armour is having a good week—and celebrating accordingly. Not only did revenue for the year grow 28 percent (with the final quarter up 31 percent), Fortune explained, but on Thursday, its stock jumped more than 20 percent. So, how did it celebrate? By paying it forward. CEO Kevin Plank’s Cupid Foundation is donating $5 million to the Carmelo Anthony Youth Development Center in Baltimore—and Under Armour is donating $1.275 million in support of the center’s activities, The Baltimore Sun reported. 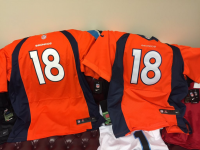 The Super Bowl is just days away—and three of the players we’ll see take the field at Levi’s Stadium on Sunday cracked the top 10 on NFL’s list of best-selling jerseys for the 2015 season, according to The Washington Post. The not-quite-Super-Bowl-bound Tom Brady notched the top spot. But make sure you’re buying legitimate jerseys. As we reported, many fake items are popping up as football fandemonium reaches its peak. 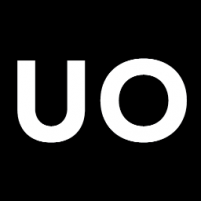 The ongoing fight—and lawsuit that’s been in court for three years—between the Navajo Nation and Urban Outfitters over trademark violations, with the former asking for potentially millions of dollars from revenue the latter acquired from products bearing the “Navajo” name, continues. Now, The Seattle Times reported, Urban Outfitters is asking a federal judge to limit how far back in time the tribe can go to find products that would lead to the aforementioned millions, arguing the tribe deserves nothing from 2008 to when the lawsuit was filed in 2012.

Seeing is believing—and it’s finally time to start believing that Playboy will actually put clothes on the playmates in its magazines. Yes, you read that right. According to brandchannel, the March issue, Playboy’s first issue to feature playmates who aren’t entirely nude, will make its grand debut at the star-studded Playboy Super Bowl Party on Friday. The issue goes on sale Feb. 12.

Would a rose by any other name smell as sweet? We don’t know if Kate Spade is a big fan of the bard, but she’s putting his (and Juliet’s) famed question to the test by changing her name to Kate Valentine, in accordance with her and her husband’s new fashion venture Frances Valentine, Refinery29 reported. Kate Valentine, the person, hasn’t been involved with Kate Spade, the brand, for nine years. And this certainly makes the split official.