The Wrap: NBA Supports LGBTQ Community with T-shirts, Would You Spend $900 on Ripped Jeans?

In honor of Pride Month, the NBA launched a new line of T-shirts featuring team logos in rainbow colors, Fox Sports reported. As of last week, patrons can buy shirts from all 30 basketball teams for $24.95. 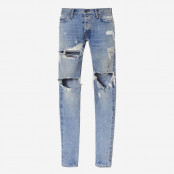 $900 can pay for a lot of things—an international plane ticket, a MacBook or a pair of ripped jeans. According to GQ, $900 men's jeans exist, and celebrities, like Kanye West, Scott Disick and Kevin Hart, own them. The Fear of God Jeans are stone-washed, and have large tears throughout and zippers on the ankles.

Spanish retailer Zara is extending its sizes to XXL, EuroWeekly reported. The clothing store, which currently offers sizes up to XL, will offer the new size in a few labels to begin with, and then plans to make it a policy collection-wide.

Apparel and augmented reality become one with Drawsta, a wearable T-shirt line powered by an iPhone app. According to Inverse, Drawsta T-shirts come with an app that displays custom animations that are updated weekly, similar to Snapchat filters. There are two T-shirt options—one that displays goofy animations and one that displays political animations.