We have some good news and bad news about the lingerie retailer Victoria's Secret. It plans to stop selling swimwear after 2016, but will focus on expanding its athleisure line, International Business Times reported. Last year the company only made about 6.5 percent of its total sales on swimwear. Its parent company L Brands also announced Victoria's Secret will no longer produce catalogs.

The weather can be unpredictable. It can be raining when you leave your house in the morning, but be sunny when you leave the office later in the day, and you're stuck wearing your raincoat. Nike is changing that with the NikeLab Transform Jacket. According to Highsnobiety, the jacket has two layers—a water-resistant woven shell and a lightweight fleece liner. When it's not raining, the shell can be used as a backpack or can be stored in the jacket's pocket. 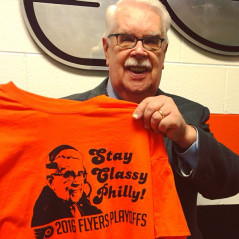 Philadelphia sports fans are not known for being the classiest fans. Case in point: the infamous Game 3 bracelet incident at the Flyers game against the Washington Capitals. Well, they decided to poke fun at themselves with their Game 6 giveaway—a T-shirt that said, "Stay Classy, Philly!" with an image of announcer Lou Nolan, who was less than thrilled during the wristband incident, The Washington Post reported. Though the Flyers ended up losing, at least the fans refrained from throwing their T-shirts onto the ice.

It's the end of the road for Englewood, Colorado-based retailer Sports Authority. Fox 31 Denver reported the company filed for bankruptcy in March in hopes to save the business that is $1.1 billion in debt, but has now decided to pursue a sale at a May 16 auction.

Hanesbrands Inc., Winston-Salem, N.C., announced how it did in the first quarter in a press release last week. The retailer's net sales increased by 1 percent to $1.22 billion and adjusted operating profit excluding actions increased by 10 percent to $147 million. “We are off to a very good start and tracking to our plan to deliver another year of double-digit EPS growth,”  Richard A. Noll, Chairman and CEO of Hanesbrands Inc., said.