The Wrap: Donald Trump's Campaign Merchandise is from American Apparel, Prince George Tee Sells Out in Less Than an Hour

It's not a secret that Republican presidential nominee Donald Trump wants stricter immigration laws in our country, which makes the fact that his merchandise is manufactured by American Apparel very interesting. Fighting for immigrant's rights is one of the Los-Angeles-based retailer's biggest causes. “Since we cannot control our wholesalers’ business practice, we want to emphasize that our core values do not always align with the messages printed on the end-consumers’ product,” an American Apparel spokesperson told Promo Marketing. 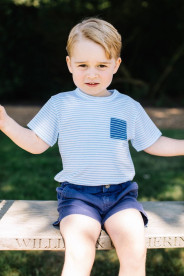 One of the world's biggest trendsetters at the moment is a toddler. In honor of Prince George's third birthday, Kensington Palace released four portraits of the toddler in which he was donning a stripped tee. The $12 Sunova tee sold out in less than an hour, Vanity Fair reported. Lets hope the U.K. retailer decides to restock.

Have you ever been shopping in Target and thought to yourself, "I really wish I had a beer right now?" Depending where you live, you might be able to fulfill that dream. According to Time, some companies are trying to pull customers away from online retailers by selling alcohol in store cafes and bars. You can drink and shop at a Target in Chicago; and Urban Outfitters in Brooklyn, Los Angeles and Austin . Warning: This might get dangerous for your wallet.

Torrid, a plus-size apparel brand known for its trendy clothing, is becoming even more inclusive. The City of Industry, California-based clothing company is launching a denim campaign with new styles available in sizes 10-30, Refinery 29 reported. Some of the women featured in the campaign include model Lyanna Lynette and "Orange is The New Black" actress Adrienne C. Moore.

Unisex clothing is on the rise. And now, the trend is expanding to children's markets. According to the Star Tribune, Target is launching Cat & Jack, a unisex children's clothing line available online only. Items include T-shirts and hoodies in basic colors, like black and white, and with slogans, such as "Artist" and "Rock Star."