Anyone who spends even a little bit of time on Facebook (so, most of the population) is probably familiar with those weird targeted ads that want you to buy custom T-shirts personalized with your name. Usually they're in the template of some common phrase or something. For example, I barely use Facebook, but I still somehow am inundated with companies trying to sell me shirts that say "It's a Brendan thing, you wouldn't understand," or "I can't keep calm, I'm a Brendan!"

They're a strange phenomenon, and the tactic of hawking personalized T-shirts in about the least personalized method possible is nothing short of ironic.

We did a little story about how they are made last year.

And, because denizens of the internet love a good bit of irony, there's of course a subreddit devoted to making fun of these targeted T-shirts.

If you're not a Reddit user, a subreddit is a specific corner of the website devoted to a specific topic. There are subs for sports teams, hobbies, you name it. 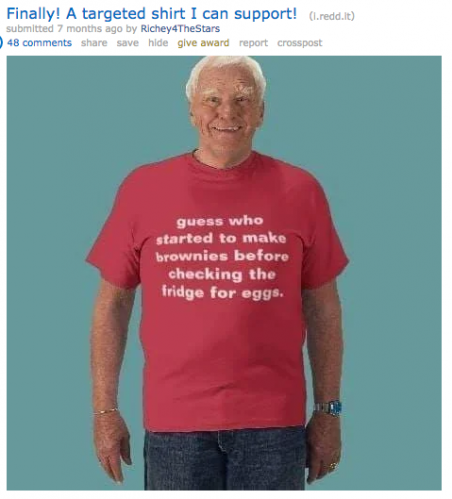 The subscribers of this particular group are united in their distaste for the targeted ads for personalized T-shirts. The point of the page is to showcase some of the worst of these designs and have a collective laugh about them. Here are some of the top posts:

Finally! A targeted shirt I can support! from r/TargetedShirts

Smallest target on here. from r/TargetedShirts

My dad got me this shirt for my birthday. Bless his heart from r/TargetedShirts

The shirts take information about where you live, when you were born, and maybe your job or hobbies that you've listed on your Facebook page. They package all of that up and spit out a very … nice … T-shirt that encapsulates what you definitely want to present to the world.

If it sounds like all of this was just cranked through a computer algorithm, you're very astute. It was.

The Next Web reports:

CNN profiled one of the small businesses who produce these shirts. The shirts were the product of a phrase-spitting algorithm and mocked-up product images. The shirts are made to order—so, you know, there aren’t hundreds of “I’m a mom who listens to Stevie Wonder and was born in March” shirts sitting in a warehouse somewhere. The company then pays Facebook to show you only those mocked-up product images which tally with the data the big FB has collected on you. So if Facebook knows you’re a mom, and that you were born in March, you’re likely to see the aforementioned shirt. Others, such as Sunfrog, ask you to enter your information directly if you care to cut out the middle man.

One of the companies profiled by CNN, Solid Gold Bomb, ended up folding after their algorithm started producing some insane and violent messages based on the "Keep Calm and Carry On" template, like "Keep Calm and Hit Her."

The owner, Michael Fowler, deleted the mocked up images as soon as he could, canceled the 20 orders from people who actually wanted shirt designs like that, and refunded the money.

It goes to show that as technology advances and businesses can integrate artificial intelligence into their production flow, it's not quite seamless or foolproof yet. These are the types of errors that a human eye would catch. That's at least what Solid Gold Bomb's operations manager Cristy McCullough told CNN.

"Why would we knowingly do something as awful as this?" she said. "It just doesn't make any sense. It's just not who we are. We sell baby clothes, for crying out loud."

2020 Vision: Looking Into the (Near) Future of Promo Apparel Trends and Styles