There's No Law Against U.S. Flag Merchandise (or Is There?) 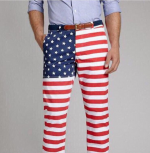 There is a code of etiquette regarding how to use the U.S. flag in merchandise, like these pants. (Image via Twitter)

The Fourth of July has come and gone, and we spent the day celebrating here in Philadelphia. From the start of the day to the finale of the fireworks display, American flag merchandise was everywhere to be seen. We wonder, however, how much of that merchandise technically is in conflict with federal law.

Did you know that there is a code of etiquette when it comes to displaying the U.S. flag? Here are a few rules for donning the stars and stripes:

Those points would seem to rule out staples of the promotional products industry, like napkins, tote bags, apparel and athletic uniforms. Yet U.S. flag items are commonly seen as giveaways.

WFAA8 spoke to retired U.S. Marine Damon Mitchell, a local flag expert, about what you can and can't do with the flag.

"Basically, any product that is temporary is not supposed to have a flag in any fashion," Mitchell told WFAA8. "Imprinted, like a picture of, or whatever, on there without disposing of it properly because it is a U.S. flag. So anything you put the American flag on is supposed to be treated like a U.S. flag."

While the code clearly states that the U.S. flag should not be used for items, like apparel and napkins, there's no penalty for violating it. That's still protected under the First Amendment.

So, even now that the Fourth of July is over, we should be on the lookout for more patriotic-themed items to come out as the Olympic Games draw nearer.