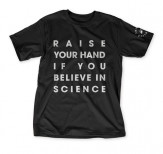 Third Eye Blind is selling this T-shirt to benefit the Hillary Clinton campaign. (Image via Teespring)

Third Eye Blind, the alternative rock band best known for '90s hits, like "Semi Charmed Life" and "Jumper," played at a charity concert in Cleveland during the Republican National Convention.

Knowing that the crowd would be full of convention-goers, Third Eye Blind frontman Stephan Jenkins decided to poke fun at the crowd, like when he said, "Raise your hand if you believe in science." That received some boos from the crowd, but Hillary Clinton referenced the phrase during her speech at the DNC last week.

Now, the band is immortalizing that taunt in the form of a T-shirt, and proceeds will go toward Clinton's presidential campaign.

The shirts, which are stylized similar to the merchandise the band released for its new album, "Dopamine," are for sale on Teespring only until Aug. 9.

What do you think? Is this a good way to raise money for one's candidate of choice, or was this in poor taste?