And you can't buy achievement in the video game world, either. You can, theoretically, buy a "Destiny 2" T-shirt that says you have, though. It'll just cost you almost a million bucks.

There is another, less expensive way, though: There's an unlockable weapon in the game called the Ace of Spades. If players manage to unlock it by Oct. 31, they'll receive a code. When they put that code in on the game developer's web store, the shirt will be available for a much more reasonable $24.99.

That makes it much more likely that anyone wearing the shirt has actually worked for it. It seems like the only way, actually, as Bungie (the game's developer) introduced one smart feature: Making it literally impossible to purchase for the $777,777.77 price tag. 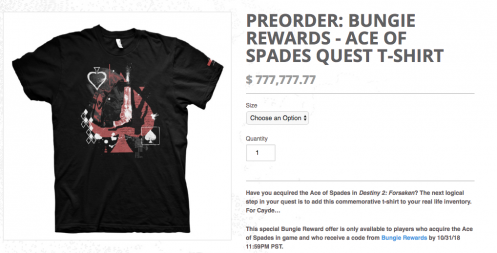 Think about those stories of kids accidentally spending hundreds by telling Alexa what they want without their parents' knowledge. A kid who really wants the shirt and has no understanding of monetary value could easily accidentally put his parents into some crazy debt.

That's not the only real-life "Destiny" indicator of achievement. According to Forbes, the game had items like a championship belt for one milestone, a jacket for finishing a raid during the first week it was in the game, and replica weapons after unlocking them in the game.

Video games have blurred the line between, well, games and e-commerce platforms with the rise of internet gaming. Traditional sports games have even brought in commercial tie-ins, where players can buy new in-game apparel and footwear, or things like skill points, for real money. Games with big online communities, like "Destiny" and "Call of Duty," frequently have ways for players to purchase new designs for weapons for real money.

While "Destiny's" T-shirt here is the opposite, and is encouraging players to earn it in the game rather than taking the easy and expensive way out, it still speaks to the way video games are practically stores on their own these days.