The battle against single-use bags has yielded greater demand for reusable totes. But, one company has found a way to create a single-use plastic bag that not only can be recycled, it comes with a self-destruct option.

Runners who completed the Chicago Marathon this past week received a post-race gift bag including promotional items and snacks, with the bag itself sponsored by Bank of America. The bag, a special new design called the Lyfecycle bag, was supplied by UK-based Polymateria.

The Lyfecycle material is derived from sugarcane. After a certain amount of time (the product's "life cycle") a proprietary additive is triggered, turning the material into a bio-available wax. That wax is then attacked by naturally occurring microorganisms and biodegraded. 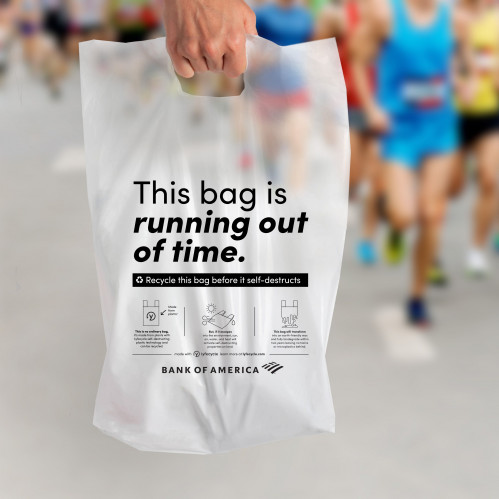 Polymeteria reportedly can "tune" the service life of the product to enhance the odds of recycling, leaving biodegradation as plan B.

Basically, if you want the bag to last for a week, it will, but once that week is up, the bag will begin the biodegrading process.

When runners received their bags, they saw a message saying that "this bag is running out of time," along with instructions to "recycle this bag before it self-destructs."

That message is displayed right next to the Bank of America logo, creating an eco-friendly association with the sponsor and the race organizers.

"We're excited to partner with Lyfecycle for the 2022 Bank of America Chicago Marathon," said Bank of America Chicago Marathon executive race director Carey Pinkowski in a press release. "Since 2010 our team has worked to incorporate environmentally and socially responsible practices into the production of our events, with the goal of limiting our impact on the communities we run through. Lyfecycle is helping us advance this mission at this year's race by providing recyclable and biodegradable bags at our finish line."

Lyfecycle head of activation Liepa Olsauskaite said that being included in the Chicago Marathon is part of a larger goal to showcase what the company's technology can do in the U.S.

"With each event we participate in, we're getting one step closer to stopping 450 million tons of plastic from reaching our oceans by 2040," Olsauskaite said in the press release.

Customers are always looking for new green initiatives. This is the kind of product a person receives, looks at the technology behind it, and thinks, "That's a neat idea."

That's what I did, at least. It is a neat idea. And it bridges the gap between phasing out single-use plastics and offering alternatives to bulky tote bags as a default.

It also goes beyond just creating recyclable material, instead creating a new concept that incentivizes recycling, but also has an eco-friendly backup plan, and prevents us from starting a new collection of plastic bags at home.