Remember those Supreme Oreo cookies we wrote about a little while ago? Remember how we said they'd be huge on the secondary market?

Well, it didn't exactly take Nostradamus to predict this one.

Those Oreos are already listed on eBay for anywhere from $25 to tens of thousands of dollars. One eBay listing even had bids as high as $92,000 at one point.

Another auction listing was at $88,988 with 90 bids so far. That particular auction has five days remaining. Others are listing a pack for $15, but if you read the description you see that you're actually paying for a "raffle ticket" to get a pack. 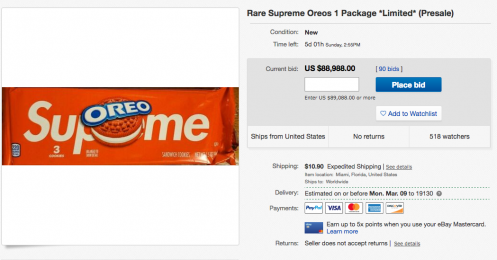 The weird thing is, those two five-figure listings were taken offline before the items sold. It's unclear whether the sellers took them down or eBay removed them, but we can't imagine a seller on the cusp of a huge payday would want to bail. There are still active listings ranging from much more reasonable ($34.50 with 12 bids) to less reasonable but better than $90,000 ($1,701 with seven bids). Either way—mysterious!

It's important to remember that the Oreos sold on Supreme's web store for $8 per pack. Obviously the Supreme resale world is long-established, so plenty of people see anything with the Supreme branding on it as an investment. But this is different. This has an expiration date, unlike hard goods or apparel. How long can the resale cycle go? Will they still have the same value purely as inedible collectors items?

We'll have to see.

But, today, just know we live in a world where people are spending a private, out of state college education's worth of money on cookies that are a different color.

Related story: This Spring You Can Get Supreme Oreos, Catcher's Gear and Ziploc Bags

Christie's Is Auctioning Off an Enormous Collection of Supreme Merch—Here's the Coolest, Weirdest and Most Expensive Stuff