Tie-In Toys Are the Future of Movie Marketing 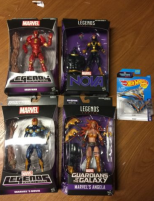 Especially in this new golden age of superhero movies, tie-in toys are huge. (Image via Twitter)

The movie and TV industry is different than it used to be. If that's not the understatement of the century, we're not sure what is. But what we mean is that people are much more likely to download movies rather than pay for them at the theaters, or cancel their traditional cable packages in favor of internet streaming services.

To make up for that, companies have relied heavily on promotional tools like licensed merchandise and toys. We've seen it through subscription services like loot crate, and an article for The New York Times explored the idea of the increased importance of movie tie-ins.

Pam Lifford, president of Warner Bros. Consumer Products, told The New York Times that toys have been one of the key ways that entertainment companies keep fans interested and engaged between releases.

"To gain market share, it has to come from somewhere," she said. She said that media conglomerates like Warner Bros. are big on developing movies that are toy-ready, like "Guardians of the Galaxy,""Fantastic Beasts and Where to Find Them" and more.

Prior to Lifford's appointment at Warner Bros., the studio merchandising unit had no growth at all during some years. But last year, profit increased 47 percent compared to 2015, with revenue from licensed products totaling $6.5 billion. That's an 8 percent increase over that same time period.

With the decline in DVD sales speeding up and the box office stalling on a global scale — even as movies become more expensive to make—studios like Warner for the first time are looking to merchandise as an engine.

Citing a Bloomberg analysis, The New York Times also reported that film studios will release 25 movies this year with toy tie-ins. That's up from the past average of about eight.

I mean, let's look at what's coming to theaters (or home computers) within the next few months: "Wonder Woman," "Captain Underpants," "Cars 3," another "Transformers," and "Despicable Me 3" are all pretty toy-ready, if you ask us.