There’s just a little more than a month until the 2016 Summer Olympics get underway in Rio de Janeiro. But athletes, like Rory McIlroy, who’ve opted out of this year’s Olympics for Zika virus-related health concerns, aren’t the only ones already looking ahead to 2020.

Last week, the 2020 Tokyo Olympic Games unveiled the first official merchandise for the event. And, according to Inside the Games, on the first day of the release, 15 of the 26 product lines sold out online. 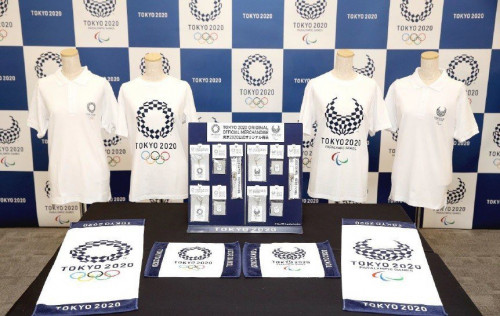 The 2020 Tokyo Olympic Games unveiled merchandise with the official logo. (Image via Inside the Games)

The quick sellout probably is reassuring for the Tokyo Organizing Committee of the Olympic and Paralympic Games after the controversial start to the event planning. When the original Tokyo 2020 logo was unveiled in August 2015, it faced heavy criticism that designer Kenjiro Sano had plagiarized the logo of a Belgian theater, Theatre de Liege. The design was scrapped, and an open competition—the first in Olympic history—was held to find new logo designs, according to a press release.

The winning designs, “Harmonized Chequered Emblems,” for the Olympic and Paralympic games were chosen in April 2016 and designed by Asao Tokolo.

“This chequered design in the traditional Japanese color of indigo blue expresses a refined elegance and sophistication that exemplifies Japan,” the press release read. “Composed of three varieties of rectangular shapes, the design represents different countries, cultures and ways of thinking.”

The Tokyo 2020 merchandise, which is part of the licensing program for the 2020 Olympic Games, is available online, at sporting goods stores in Japan, and at shops in Tokyo metropolitan government buildings. The sold out items will be replenished soon.

The organizing committee expects the merchandise to generate $120 million before and during the event.