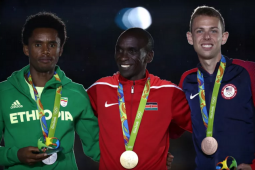 To cut down on e-waste, Tokyo is looking into making Olympic medals from discarded smartphones. (Image via The Verge)

The Rio Olympics just wrapped up, but that's not stopping the Olympics conversation. However, the news this week surrounds the 2020 Tokyo Olympic medals. (You know, for the Olympics that aren't for four years.)

According to The Verge, organizers of the 2020 Olympic Games in Tokyo are considering making the Olympic medals from old smartphones. The country first discussed the idea in June to raise awareness about e-waste.

But that's not the only reason for the recycling. Japan does not have an ample supply of precious metals like other countries. Instead, the gold and silver contained in discarded electronics makes up 16 to 22 percent of the global gold and silver supply. So, the recycled smartphones should contain enough materials for the Olympic medals.

This initiative would be a win-win for Japan. Currently, Japan generates approximately 650,000 tons of e-waste every year. Olympic organizers are hoping these hypothetical Olympic medals could encourage more recycling.

What do you think of Tokyo's idea?