The case of the missing jersey—not a "Hardy Boys" story, just the actual chain of events that occurred after the New England Patriots won Super Bowl LI. After the Pats won their game against the Atlanta Falcons, Patriots quarterback Tom Brady quickly changed into his new Super Bowl champions T-shirt, and his game jersey disappeared.

According to ESPN, the mysterious jersey has been located as a result of a big-time investigation. The Houston Police Department, together with NFL security, Patriots security and the FBI, finally cracked the case after a tip came in. 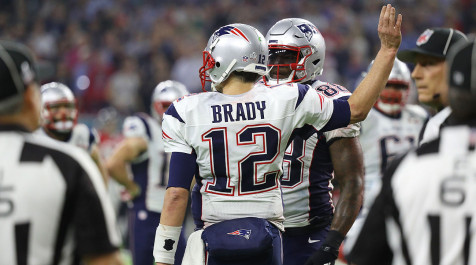 After months of searching, authorities finally received a tip that led them to Tom Brady's missing jersey. (Image via Sports Illustrated)

A source told ESPN a man named Martin Mauricio Ortego was in possession of the jersey. The source explained he was able to obtain media credentials, which gave him access to the Patriots' locker room. Ortego also had Tom Brady's jersey from Super Bowl XLIX and a helmet belonging to Denver Broncos player Von Miller.

Authorities are in the process of authenticating the jerseys, but it's not looking good for Ortego. Miller's helmet contains stickers specific to the missing helmet from Super Bowl 50.