Tom Petty was awesome. Tom Petty still is awesome. This is barely even a subjective statement. The guy had more hits than a home run derby, spent his career doing things on his terms, and kept touring and releasing music until his death on Oct. 2.

In classic Petty fashion, his funeral still had a rock 'n' roll spirit through something other than music. We're talking about T-shirts.

According to Wonderwall, those who attended Petty's funeral this month—including some big names like producers Rick Rubin and Jimmy Iovene, and actor Sean Penn—received a tote bag containing a Tom Petty T-shirt. 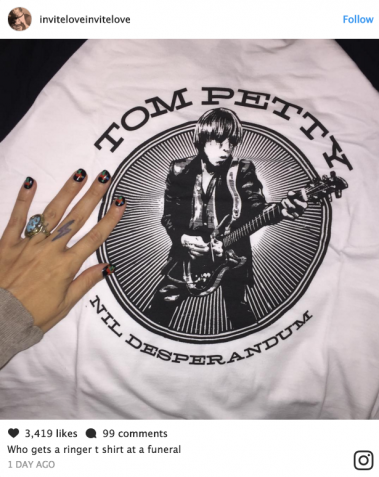 Petty's daughter, AnnaKim Violette, posted an image on Instagram of the T-shirt given out at the service. It features a picture of a young Petty with the phrase "Nil Desperandum," which translates from Latin to "Do not despair."

She captioned the photo with "Who gets a ringer T-shirt at a funeral?"

Tom Petty's friends and family get a T-shirt at a funeral.

Last year, after Prince died equally as unexpectedly as Petty, we reported that the late performer's funeral included a gift bag for attendees, too. This bag, emblazoned with the artist's symbol and "The Eternity of Prince," included a pen and chain.

Guys like Tom Petty deserve to be remembered through something fun, like a concert T-shirt. That's how so many people remember him anyway; through concert T-shirts they've picked up over his decades-spanning career. What better way to memorialize a rock icon?