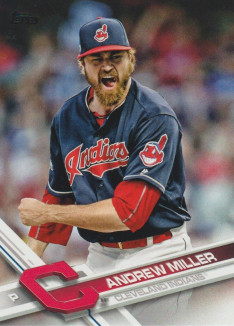 Topps' 2017 depiction of closer Andrew Miller includes the block-C that will appear on every Cleveland Indians player's baseball card. (Image via Topps)

As August and September beckon, the Cleveland Indians figure to fetch a few headlines in the hope of holding off the suddenly hot Kansas City Royals in American League Central action. While their play will always attract the lion’s share of attention for lovers of our nation’s pastime, their attire will certainly remain a controversial consideration for as long as ownership continues to use the long-loved (yet increasingly loathed) Chief Wahoo insignia. Yesterday, Topps Company, Inc. made official that it will abandon the depiction for all future cards, electing to use the franchise’s block-C identifier as a free-standing logo instead.

Objection to the Chief Wahoo emblem has led Major League Baseball Commissioner Rob Manfred to join the conversation about the signifier’s future use, with extra opposition stemming from the clear fact that their recent run of success, notably last year’s World Series appearance, has made the Indians more visible and the logo more debatable. Topps, the sport’s sole card manufacturer, will not go so far as to remove all artistic appropriations on the Indians-centric keepsakes, as its images of players will continue to include uniform renderings of the smiling figure.

“We continue to use the primary and secondary logos that are determined by MLB and its clubs, and show players in whatever uniforms they happen to be wearing,” the New York-based entity said in a statement. “To the extent [that] we show team logos on a free-standing basis, it is generally the then-current primary logos of the clubs.”

This certainly marks some sort of victory for advocates opposed to teams’ use of Native American images and mascots, which, they contend, foster negative perceptions about indigenous groups. Those individuals will also revel over Topps’ decision to dump the Atlanta Braves' screaming Indian logo, replacing it with the club’s very recognizable “A,” that the Braves used to call on and considered reinstating in 2013.

Yesterday’s announcement will not heal all the wounds of those who have balked over the Ohio organization’s decision not to do away with Chief Wahoo completely, but it does make for some very interesting news within the promotional products industry. Topps will enlist the block-C not only when issuing the commercial representations of current and future roster members but also when honoring past performers through retro set unveilings. Collectors will undoubtedly take notice, but, as this piece argues, who is on a card appears to matter more than what is on one.

What is your estimation? Will Topps strike out with this move, or will the company take the rich history of baseball cards in a new, more socially conscious direction?