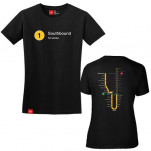 Last year, the Toronto Transit Commission (TTC) launched a line of Toronto-themed memorabilia, including T-shirts, prints, pillows and drinking glasses, to raise money for the commission. This year, the TTC launched another line of merchandise online for Torontonians and visitors to remember their time in The Six.

From 2006 to 2010, TTC sold its merchandise in Toronto's Union Station, according to Torontoist. After gaining a little more popularity last year by opening a physical shop in coordination with Spacing, the TTC wants to raise even more through its branded merchandise. Now, it's hoping that the online outlet will be even more successful.

"We took our time to develop the merchandise with a retail and external mindset, rather than simply putting TTC logos on various products," Cheryn Thoun, head of customer communications for TTC, told Torontoist.