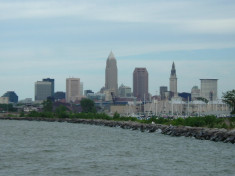 There's an old adage that you'd probably hear on college campuses: Only freshman wear apparel with the school's name on it. We know that's patently false because, well, we went to college, too. That same idea might apply to popular tourist destinations. The locals surely wouldn't wear shirts with the city's name on them—or would they?

One travel writer was so taken aback by Cleveland's city spirit that, in his review of Cleveland for the Daily Mail, wrote that "everyone there wears a T-shirt emblazoned with 'Cleveland.'"

Here are the first couple of paragraphs of the story:

In most parts of the world, if you were to wear a T-shirt bearing the name of a city, it would mark you out as a tourist. In Cleveland, things are different—if you’re NOT wearing a T-shirt with the name of the city on it you look like a tourist.

Whether it’s one of the sports teams—the Indians, the Cavs or the Browns—or just the famous city script, Cleveland T-shirts are everywhere you look. Moms on the school run, construction guys on their way to work, waitresses at the neighborhood diner—they’re all proud to wear their heart on their sleeve and Cleveland on their shirt.

It’s a city, much like my native Glasgow, that inspires huge loyalty in its citizens.

The kind of unaffected, genuine enthusiasm and warmth that’s infectious and impossible to manufacture.

The reasoning behind this isn't just the presence of local sports teams. In fact, it might be that Cleveland's reputation as the butt of many geographical jokes has given residents an us-against-them mentality and spurred T-shirts to boost pride.

Sure, Cleveland's T-shirt industrial complex leaves us with a brand per capita ratio that's probably not sustainable and definitely not necessary, but that doesn't answer the question of why, once this stuff's in our drawer, we actually take it out and wear it.

People love to rep where they're from, especially if they feel like the rest of the world doesn't take their city or state seriously. Which, due to Cleveland's recent sports history, is a common belief. But, for every major metropolitan areas with the right combination of woeful athletic existence and civic pride, merchandisers can cash in and rest assured their messages will be seen.