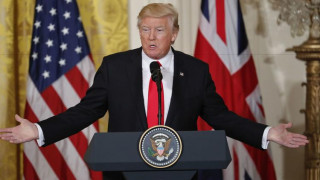 The Trump administration hinted that it might ignore World Trade Organization rulings if they conflicted with the president's plans. (Image via the Los Angeles Times)

The Trump administration announced on Wednesday that it could choose to sidestep certain rulings from the World Trade Organization (WTO) if it didn't fit in with the president's plan of U.S. sovereignty.

This approach could have worldwide repercussions. In the plan sent to Congress, the administration suggested that it could unilaterally impose tariffs and sanctions against countries deemed to have unfair trade practices, and punish domestic countries that move overseas.

This has long been a talking point for President Trump since his early campaigning days, so it's not a surprise.

"It is time for a more aggressive approach," the document said, according to The Washington Post. "The Trump Administration will use all possible leverage to encourage other countries to give U.S. producers fair, reciprocal access to their markets."

The report also included a section called "The President's Trade Policy Agenda," which detailed possible breaks from the WTO.

The biggest concern here, for some, is that trade partners would place similar tariffs to penalize U.S. manufacturers.

"If the Trump administration follows through on the proposals in this document, it would be a body blow to the multinational trade system that the U.S. has helped to build up," Eswar Prasad, senior professor of trade policy at Cornell University, told The Washington Post. "The WTO will lose effectiveness and credibility in trade resolutions if the U.S. decides to walk away."

Others are concerned that other countries would follow suit, instituting strict protectionist policies, thereby impacting the global economy.

Thea Lee, deputy chief of staff at the American Federation of Labor and Congress of International Organizations (AFL-CIO), said that labor unions had a mixed review of this plan.

"On the one hand, we would agree with certain parts, that our trade policy has not been aggressive or consistent enough in looking out for the interest of american workers," she told The Washington Post. "We would agree we should enforce our trade laws better. We don't necessarily agree that we need to go completely outside the international trade system."

Others are saying that the critics crying "trade war" are overreacting.

"As for trade-war alarmists, they apparently assume that the same countries that rely so heavily on exports to the United STates for their growth, economic development and employment will unleash attacks on their biggest and best customer," Alan Tonelson wrote for The New York Times. "The United States is not only the world's biggest single national economy, but for all its recent sluggishness, it has also generally been the fastest-growing major economy, and it is the most open to imports. That's why it's the single largest export market for a fifth of the world's countries."