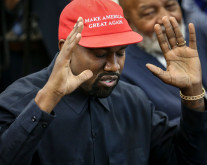 President Donald Trump's re-election campaign manager, Brad Parscale, has finally given us some metrics on Trump's MAGA hats. According to Newsweek, Parscale spoke to CBS News' "Face the Nation" about the role that Trump's supporters have played in his campaign.

The Make America Great Again hat, as we know, has been instrumental in Trump's fundraising, helping raise a ton of cash and becoming an enduring icon of the Trump presidency. Now, we know a little more about just how instrumental it is. Here's Parscale, via Newsweek:

We're closing in on selling our one millionth red MAGA hat. You know those are 45 bucks a piece. You do the math there really quick, it's $45 million. So those kind of things—this president has changed the game in the way merchandise, rallies, the entire experience of being part of the political movement. He's changed it.

Parscale also reaffirmed Trump's strength with small donors, telling "Face the Nation" that 95 percent of the campaign's money comes in through small-dollar donations.

While Parscale didn't give exact numbers on the MAGA hats—the $45 million mark seems more like an estimate based on some rough calculations—one million hat sales is certainly a milestone for Trump's campaign. We're not sure what additional MAGA hats or other merchandise offerings the future has in store as Trump's re-election campaign moves forward, but we're sure the team will want to capitalize on the hat's popularity. There's already plenty of variations available.