Trump, Cruz Use Apparel to Continue Their War of Words

Now, those barbs have made their way to official campaign apparel. 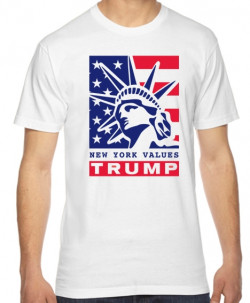 Available on Trump’s webstore, the Trump Liberty Values Men’s Short Sleeve T-shirt takes another dig at Cruz’s negative “New York values” comment made in January after winning the Iowa caucus. While the remark may have helped Cruz then, it did quite a bit of damage to his chances to compete in yesterday’s New York primary. Trump has been taking advantage of the situation on the campaign trail, trumpeting the “New York values” Cruz previously dismissed.

The $20 white shirt features the head of the Statue of Liberty on an American-flag backdrop with “New York Values” and “Trump” scribed below. 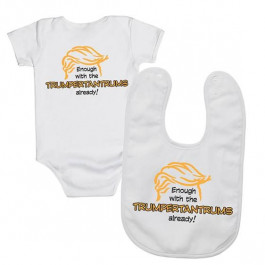 In Cruz’s online store, a “Trumpertantrums” pack, calling to mind Trump’s behavior when something doesn’t go his way, is available for pre-order. The pack includes a baby onesie and bib, and features an outline of Trump’s recognizable hairstyle and the phrase “Enough with the Trumpertantrums already!”

According to Cruz’s store, demand for the $40 bundle is high, which may lead to lengthier delivery times.

Both of the candidate’s new additions to their online stores are made in the U.S.