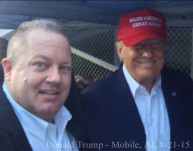 Krena and Almon Poole, a couple from Alabama, support Donald Trump's presidential campaign in a big way. The two claim to have invested $50,000 to create Trump-themed T-shirts, and follow Trump on his campaign trail to sell merchandise outside of speaking events and rallies.

The Pooles loaded their "Make America Great Again" T-shirts, and followed the Trump campaign to Iowa and Oklahoma. Though the apparel isn't licensed Trump merchandise, the couple said they want to support the campaign any way they can.

Apparently they aren't the only fans who have decided to set up shop and sell unlicensed campaign merchandise. The Pooles worked along side Vincent Reul, a St. Louis native who sold Trump buttons and hats.

Reul told McClatchy that he wasn't sure Trump was his candidate of choice, but he admired his ability to draw a crowd and saw an enterprising opportunity in it.