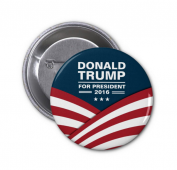 It looks like presumptive Republican presidential nominee Donald Trump has turned his focus toward promotional products rather than broadcasted ad spots when it comes to his campaign.

Based on figures reported by CNN Money, it looks like Trump plans to continue this trend leading up to election day. His campaign committed to spending $700,000 on television advertising prior to election day, compared to Hillary Clinton's planned $117 million for televised advertisements.

It makes sense for him. When thinking about the Trump campaign, the first thing that comes to mind is his merchandise. His campaign is synonymous with his "Make America Great Again" hats and signs. While Clinton and other candidates have plenty of physical merchandise for supporters, Trump's slogan has become recognizable on a level similar to "I Like Ike" or President Barack Obama's "Change" campaign.

And his supporters certainly have embraced the merchandise boom. As we reported last month, Trump has raised more than $6 million from his branded items, which is a majority of the campaign's individual contributions.

Last quarter, Trump's campaign spent only $6.7 million, CNN Money reported. Clinton's campaign spent $14.1 million. However, it looks like he's ramped his spending back up after clinching the GOP nomination in May. His June spending totals reached more than $7,765,000.

But, while this spending is an increase, his overall marketing spending (including televised and online ads) was only about 41 percent of the overall cost, compared to the 75 percent in January, when he still had more candidates to battle in the primary.

So, while he's lowered the money allotted toward marketing, the money he has allotted has gone to tangible products. It will be interesting to see how, as we move closer toward the general election in November, his campaign spending increases or decreases.

It also will be interesting to compare his figures with Clinton, who has offered plenty of promotional products on her own and already has spent $117 million for televised advertising. The Clinton campaign has not disclosed its June spending to the FEC yet.