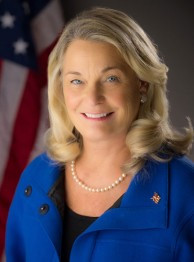 Buerkle was already acting chairman after Elliott Kaye resigned. If you recall, prior to Kaye's resignation, he wrote a statement criticizing President Trump's executive order that called for the elimination of two regulations.

Now that Buerkle has been nominated as permanent chairman, her seven-year term will begin on Oct. 27, 2018 when her first term is set to expire. If she is confirmed, she will become the permanent chairman immediately, and her new term will end in October 2025.

After Trump was elected, the commissioners unanimously voted to elect Buerkle as the vice chairman of the agency, which made her ascension to acting chairman possible.

The National Law Review pointed out that there are speculations that the administration is searching for a Republican CPSC commissioner to replace Democratic commissioner Marti Robinson whose term expires October 2017. If no Republican commissioner is selected, her tenure will extend up to one year, and the commission will remain under Democratic control.