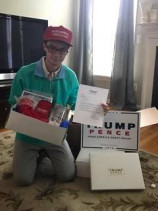 Donald J. Trump for President Inc. sent a letter and campaign merchandise to students whose quotes and photos were altered in their high school yearbook. (Image via Facebook)

Earlier this month, three high school students in New Jersey found themselves at the center of controversy after their yearbook photos and quotes (both related to Donald Trump) were altered in the final print of the yearbook. One student's Trump T-shirt was blacked out in the photo to appear as a plain T-shirt, and his brother's quote was omitted from the yearbook completely.

This week, Michael Glassner, executive director of Donald J. Trump for President Inc., sent the students a letter and campaign merchandise to show the president's support.

Dear Wyatt and Montana, I hope this letter finds you well. I was dismayed to learn that your Trump shirt and Trump quote were censored in your high school yearbook. I commend you all for voicing your support of the president and his vision to Make America Great Again.

It is more important than ever that we, as Americans, stand up for our beliefs and hopes for a better country. And, as you know, it takes courage to do so. But, the freedom of expression should never go out of style—let's not forget that!

Please find enclosed some campaign merchandise to wear around the great state of New Jersey and wherever else life may take you.

I wish you the best of luck in your future endeavors and, on behalf of President Trump and Vice President Pence, thank you again for your support. Let's work to Make America Great Again!

That's all well and good, but according to Newsweek, the debacle with the Wall Township School District is not over.

Wall Township Superintendant Cheryl Dyer admitted that the photo of Wyatt Berardo in his Trump T-shirt had been edited, but was only resized and cropped, so the image is simply not visible. Since the news of this broke, the teacher in charge of the yearbook was suspended, and Dyer decided to reissue the yearbook.

"I do not believe that it is possible to create a yearbook of 248 pages, thousands of pictures, names, and lines of text and have it be error free," Dyer said in a letter to the parents. "I also think that reasonable people recognize that, but when the error pertains to them, they are rightfully upset."

The reissued yearbook will include the original images and quotes.