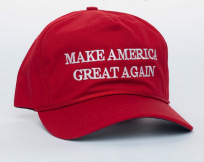 Donald Trump's reelection campaign looks like it will focus heavily once again on merchandise. (Image via Trump's online store)

Donald Trump has gotten an early start on his reelection effort, having raised $13.2 million in the first quarter of 2017. According to Politico, much of that has come from merchandise sales. As we saw last year, merchandise and promotional products were integral to his campaign and his eventual victory. Items like the Make America Great Again hats were, and still are, widely connected to his campaign and presidency.

Among the three committees that make up his reelection effort—Donald J. Trump for President, Trump Victory and the Trump Make America Great Again Committee—the campaign invested about $5 million into merchandise, like hats, T-shirts, mugs and stickers. About 80 percent of the funds raised by the committees came from small donors.

If you recall, Donald Trump's campaign spent more money on his Make America Great Again caps than they did on polling during the lead-up to the election, showing where much of their priorities were in terms of getting the word out there. If this report is any indication of what his reelection effort will look like over the next four years, it appears as though the trend will continue.

The same Politico article, citing the Federal Election Commission (FEC), noted that the Trump campaign invested about $2.7 million on data, telemarketing and other fundraising activities.

The Republican National Committee claimed that it raised another $41.3 million during the same time span, but has yet to file a final FEC report for the quarter, so there's no way to tell where the money came from specifically.

So, while there's still plenty of time before we have to start worrying about the 2020 election, we can expect plenty of merchandise coming from the president's reelection effort in the months and years to come.