Will Trump Have Difficulty Adhering to 'Made in U.S.' Clothing Regulations? 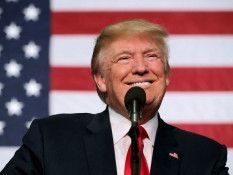 One of President-elect Donald Trump's platforms was cutting down on manufacturing job outsourcing. However, this has led many to speculate how exactly this fits in with Trump's own clothing lines, since a majority of the collections are produced overseas.

According to The New York Times, this conflict of interest extends to Ivanka Trump's clothing line, as well. One of her collection's blouses is made in Indonesia, a jacket is made in Vietnam and a leather bootie is made in China. For Trump, a blue cap is made in Bangladesh and a Trump Tower hoodie is made in Pakistan, to name a few.

Trump said that U.S. companies working with overseas factories are a huge problem for the U.S. economy. If Trump decides to move forward and crack down on these clothing companies, he risks damaging both his and his daughter's own businesses.

But, perhaps it won't even matter to Ivanka Trump. She previously has made comments indicating that if Trump asked her to become an advisor to the Trump administration, she would separate herself from her business.

So far, Trump has remained quiet on his specific plans for domestic manufacturing.