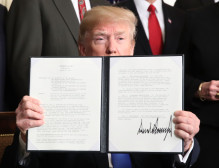 U.S. President Donald Trump holds up a signed presidential memorandum, aimed at what he calls Chinese economic aggression, in the Roosevelt Room at the White House on March 22, 2018 in Washington, DC. | Credit: Getty Images by Mark Wilson

President Trump told CNBC's Joe Kernen that he was "ready to go to 500," referring to a possible increase in the already staggering amount of tariffed products from China.

For those keeping score at home, the U.S. accepted $505.5 billion in Chinese imports in 2017. That would mean that, in his statement, Trump indicated that he is ready to put a tariff on every single imported good that the U.S. receives from China.

This comes just over a week after the U.S. Trade Representative proposed a modified list with an additional 10 percent on $200 billion in Chinese products, many of which have direct connections to the promotional products industry, such as cotton, hats, paper products and more.

Trump has made it abundantly clear since the beginning of his presidential campaign that he wanted to change the way the U.S. does business with China. Still, the scorched Earth policy is startling.

"I'm not doing this for politics," he told Kernen. "I'm doing this to do the right thing for our country. We have been ripped off by China for a long time."

He added that it wasn't meant to frighten China and brought up his relationship with President Xi Jinping, which he sees as positive, as a reason for him to want them to do well. But, he called the U.S. and China's recent relationship in regards to trade as "very unfair."

Trump's proposal hasn't been universally accepted even in his own corner. The Chicago Tribune reported that Sen. Orrin Hatch, one of Trump's strongest allies in Congress, delivered a speech this week on the Senate floor threatening to push legislation that would rein in Trump's authority regarding trade. Hatch cited his concerns over not only China, but the president's bluster about NAFTA allies Mexico and Canada.

"If the administration continues forward with its misguided and reckless reliance on tariffs, I will work to advance trade legislation to curtail presidential trade authority," Hatch said, according to the Tribune.

Should the tariffs go through as planned, it could hit more than textiles, apparel and plastics. The U.S. imports a lot of high tech goods from China, so that would put companies in the wearable tech sector like Fitbit, Sonos and Apple in harm's way.

That's because items like speakers and wearable devices would fall under the "data transmission machines" category in the list from the beginning of July.

President Trump told Apple CEO Tim Cook that the government wouldn't impose tariffs on iPhones made in China. However, a vice president of the Consumer Technology Association said that made it seem like Trump is targeting certain companies, as the president switched from Android to iPhone last year, per Engadget.

While some economists have tried to downplay the idea that, despite Trump's own words, these actions would lead to a trade war, the phrase sure is being thrown around a lot more now. Add to that the fact that Trump-related products from China are now being held at customs.