Tullamore Dew, everyone's second favorite Irish whiskey brand after Jameson (remember this for later), is running a two-part St. Patrick's Day promotion it's calling "O'Everyone." One part involves some fun branded merchandise. The other involves, um, legally changing your last name in exchange for a shot at winning a trip to a pop-up Irish pub in the middle of the California desert.

Let's start with the branded merchandise. On Tullamore's O'Everyone website, whiskey fans can order the "Tully Bundle," which includes a T-shirt and a bottle label. In a fun twist, the items are personalized—type in your last name, and it'll generate on both. It even adds an "O'" to the name, making it extra festive: 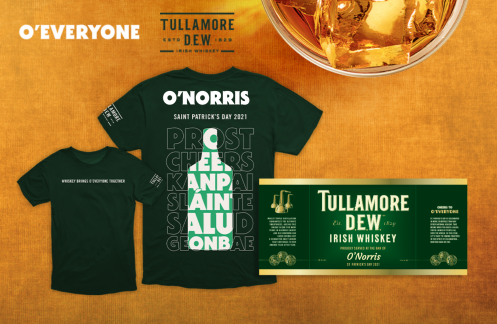 There are some cool little touches here that elevate the merchandise beyond your typical bundle. On the shirt, the personalization appears on the back above a large graphic, while the Tullamore Dew logo is printed on the sleeve. The front has text written across it. That's multiple decoration areas, making good use of the available real estate. (The Canadian version of the shirt is slightly different, with personalization on the back and sleeve.)

It also effectively combines printed and promotional products by including the label—adding an extra personalized element and increasing the overall value of the bundle. That's important because 100% of the proceeds from sales of the merchandise will go to CCDI, a Canadian charity focusing on diversity and inclusion.

That's the first part of the promotion. The other part, as noted, is a bit more ... intense. Along with the merch bundle, Tullamore is running a contest where fans can win a "once-in-a-lifetime St. Patrick's Day experience"—a trip for four to a Tullamore-branded Irish pub built in the Mojave Desert. The one-day trip includes meals and ground transportation. 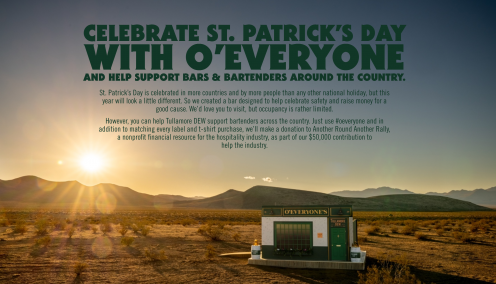 The catch is, only people whose last name is "Jameson" can enter—and they have to change their last name to "Tullamore." (We told you the Jameson detail was important.) The contest is only open to California residents, and it requires entrants to write a 150-word essay describing why they "want to be in the Tullamore family." Once the winner is selected, all they have to do to claim the prize is legally change their name.

Well, almost. From the contest rules:

So, basically, everything but a legal name change. Which is smart, because that's a pretty big commitment and probably a good amount of hassle for a prize valued at $1,120. But, still, it's the thought that counts. And it's a clever, headline-grabbing hook for a promotion (not to mention nice use of some experiential components), sure to generate some solid marketing exposure for Tullamore Dew. It's all supported by a hashtag campaign, tying it all together on social media.

As Brand Fuel's Danny Rosin told us on a recent episode of the Promo Marketing Podcast, we can expect more of this kind of thing moving forward as brands look for ways to combine digital activations with in-person experiences. The major benefit, of course, is that it gets people talking. And who knows, maybe this campaign from Tullamore Dew will inspire another brand to fully commit to the name change thing.

C'mon, Burger King, we dare you to challenge everyone named "McDonald" to really go through with a legal name change. Now that'd be fun.