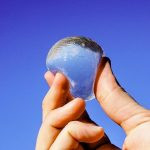 Everyone goes through a creative slump, but the brains at Skipping Rock Lab are working fairly fluidly these days. The London location’s scientists have a different sort of liquid asset at their disposal as they plan the increased implementation of Ooho!, an edible water bottle ball intended to reduce the rampant reliance on customary plastic containers.

With biodegradable algae as its exterior, the newfangled product has begun to cause consumers to bubble up not only because of its novelty but also the long-reaching enthusiasm the developers have for protecting the planet. Their Imperial College-based research, as revealed through a website trip, aims to stop one billion of the aforementioned nuisances from reaching oceans each year and to prevent the emission of 300 million kilograms of carbon dioxide annually. Only company event goers in Boston, London and San Francisco have sampled the innovation, though Skipping Rocks Lab co-founder Pierre Paslier promises added exposure for his team’s brainchild.

“Where we see a lot of potential for Ooho! is outdoor events—festivals, marathons, places where basically there are a lot of people consuming packaging over a very short amount of time,” he stated of an item that will “provide the convenience of plastic bottles while limiting the environmental impact,” per the website.

The winner of four major prizes, including the 2014 World Technology Award held in association with Fortune and TIME, Skipping Rocks Lab called on its clout to establish a crowdfunding page, with Paslier and his peers having far exceeded their initial goal. As the fruit of two years of labor, the Ooho! is very much like a piece of fruit in that purchases can peel off the top layer to access the drink or eat the entire package, with the overall blueprint—the Wired Retail 2016 Start-up of the Year—being the entity’s contribution to solving the plastic waste problem and reducing climate impact from packaging.

Having recently inked its first commercial license, Skipping Rocks Lab, whose efforts dovetail with numerous Promo Marketing-covered moves as environmental enhancements, has commended conversations with titans such as Live Nation and Virgin Sports to pilot Ooho! this year and feature it at major gatherings next year. A Metro U.K. treatment of the topic has potential users inquiring about logistics, but once the overseers address those and similar concerns, cases of water could find themselves swept up in the increasing current of calls for more innovative global consideration.